Sarah Sze - Our Artist in Venice 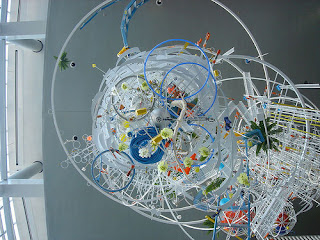 Sarah Sze, an artist whose work is rich, fascinating and a bit hard to pin down, has been chosen to represent the U. S. Artist for the 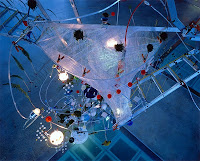 upcoming Biennale in Venice, the prestigious international art extravaganza that holds court each summer in and around the familiar tourist spots of that city.  I'm particularly happy about the choice - I think Sze is one of the most interesting artists of our time; whatever she does it will be worth the trip to see it. I first came across her work at SF 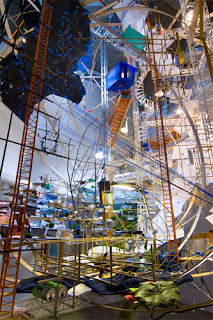 MOMA in 2001 on a class trip with high school students. Her installation Things Fall Apart, hanging from the atrium, snaking up the stairs, sneaking up on you in corners, and sort of dribbling its way into places where you least expected it, provided a great object lesson.  Just about everything I needed to say about (good) 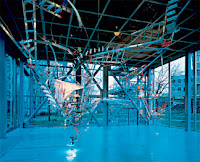 contemporary art was in the jumbled bits of her art. You're in a partnership of meaning: the art doesn't offer easy answers, it makes you work to figure it out, it doesn't allow you to walk away sure of what it was supposed to mean even if you thought you knew. Things Fall Apart has a sort of car crash theme, but it's jolly rather than gruesome, and the motif is more a convenience than a directive for how to interpret it. There's metal and there are car doors, but there's a lot of other stuff too. 'Stuff' is Sze's stock in trade, and it's amazing how she uses it to put her finger on the pulse of this frantic, fractured historical moment. In articles about her work writers grope for ways to describe it - 'organized chaos' is a popular phrase. It's perhaps easier to begin, as she does, with the 'stuff' - an incomplete list of her materials includes Qtips, tea 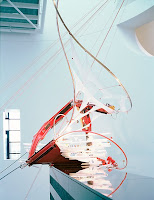 bags, salt, light bulbs, plastic toys, feathers, twigs, dried flowers, tape, pebbles..... There can be no end to the list because everything is fair game. Her installations are at once energizing and 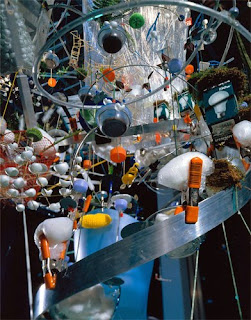 soothing - they fit the universe we've either embraced or accepted, one of too much information zooming at us from every direction, and in what she does we recognize the struggle to keep up and make sense of it. In some sense she's taken the old 19th century 'cabinet de curiosities' concept and exploded it, super-sized it, blown it - literarly - to bits. Sze builds her pieces on site - she clearly has a very rational mind and follows a plan, often worked out beforehand in her Brooklyn studio, but she has an immense gift for maximizing the serendipity of space, time, color, form, texture .... and just about everything else. Sarah Sze's story is not as long as you'd think for someone doing work 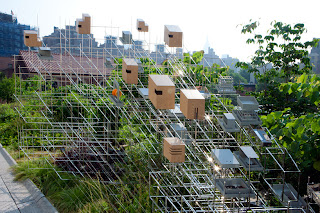 of this assurance and maturity; she graduated from Yale in 1991, got a master's from SVA in New York in 1997, and two years later had a landmark exhibition at the Fondation Cartier in Paris, an event that riveted attention on a new star. In 2003 she was the recipient of a MacArthur 'Genius Grant.' She's featured in the next PBS Art 21 series about living artists, available in April. Here's a link to the trailer for the series (she's in great company - it's a slate of artists with strong, interesting ideas.)
http://www.pbs.org/art21/watch-now/trailer-season-6-of-art-in-the-twenty-first-century-2012