Politics of Another Color by Charles Wilson Peale

What DO American politicians look like? Have they always had pasty tans, over-gelled hair, and 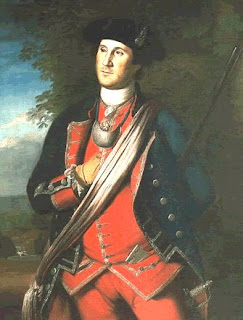 flag pins in their lapels? Thankfully no - there's plenty of evidence for a different model. Not to say that 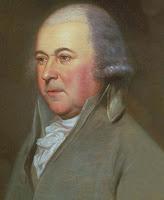 politics was ever a kind and gentle sport, but, thanks to an artist who played a part in the founding of the country, we have a vivid way of considering the nature of early politicians. Washington? Of course. We all know the painfully set jaw, the white wig, the stiff military posture, the disaffected presidential gaze. But there are other versions: ask Charles Wilson Peale, one of the most interesting, entrepreneurial artists this country has ever produced. Peale painted 60 versions of Washington, 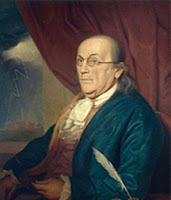 including a 1772 portrait, the earliest known depiction. Washington, wearing the uniform of his regiment from the French and Indian war, was at the time merely a Virginia farmer, though he was also starting to voice his opposition to oppressive British policies. Peale's 'Princeton Portrait' of Washington shows him 9 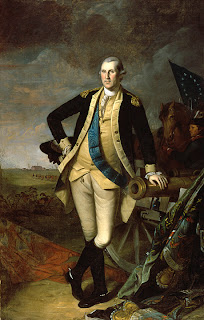 years later in full American Revolution regalia after a decisive battle. With all the trappings of a European state portrait, Washington stands elegant, fashionable and surrounded by 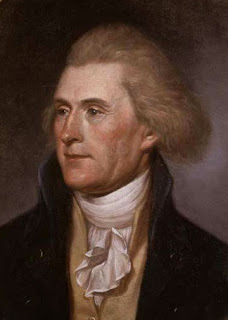 paraphernalia and attributes, proclaimed a man of great character and deed. The painting (for which Washington posed) is thought to have been commissioned by Martha Washington. (Not one for 'photo ops,' Washington sat only a few times for Peale - Peale (the entrepreneur part) made good use of his resources to produce all those versions and numerous copies, including 18 of 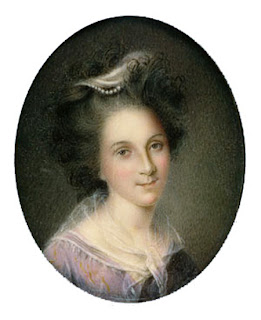 the Princeton portrait.) Charles Wilson Peale, himself a loyal patriot born and bred in the colonies who fought alongside Washington, left a treasury of portraits of colonial movers and shakers, many which can be seen in a Portrait Gallery just down the street from Independence Hall in Philadelphia. Peale, an ideal of the American pioneering spirit of inventiveness and pragmatic 'just-get-it-done' achievement, was a politician, a soldier, a fund-raiser, a naturalist, the founder of the first American 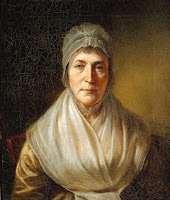 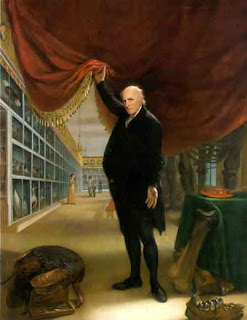 museum was originally on the second floor of what is now Independence Hall - the mastodon that used to be the main attraction is long gone, but his paintings now form the collection in the Portrait Gallery. Many of the subjects have lost their 'household name' familiarity, but the history they reveal is fascinating. Peale, who studied for three years in London, manages a gloss of European sophistication of technique and observation without losing a kind of American honesty - the paintings are a rich 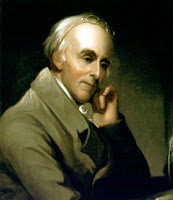 aesthetic experience as well as an historic one. A double portrait of Robert Morris and Gouvernor Morris - not related, but linked by time and effort for the American cause - is a nice example of his relaxed but respectful approach. Gouverneur Morris slouches at the left, a little cocky but with a twinkle in his eye. The bright son of a wealthy New York loyalist family, Morris authored sections of the Constitution, and despite a wooden leg, was a notorious charmer of the ladies. Though he favored a more aristocratic standard for democracy, he opposed slavery and argued strongly for religious 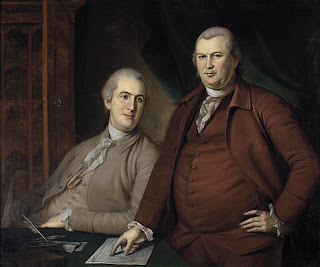 freedom. Robert Morris, a very wealthy merchant and businessman at the time of this portrait, was a man of integrity who financed much of the Revolution, including providing for the starving, freezing troops under Washington out of his own money. He also set up a clear financial plan for the young country and established the first national bank - his investments of time and money never paid off for him, however, and he died in relative poverty. Selflessness and dedication to the greater good - those ideas are in the fabric of the lives in these portraits - scientists, soldiers, intellectuals, artists, doctors, explorers, women in various capacities, and yes - politicians.