Whitney Biennial 2012 - For Better or Worse 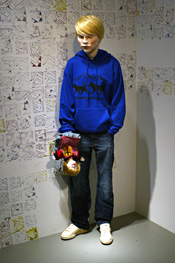 The Whitney Biennial has been pretty sickly of late so I was encouraged by reviews calling it the best in years, promising that this one was different, in a good way. I saw it Friday and don't agree - neither the 'best in years' part (though that's a fairly low bar based on the last two or three) or that the art was 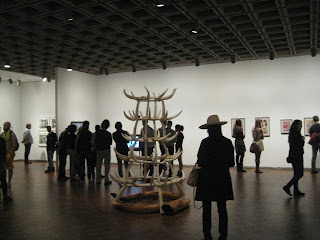 particularly different. What was different, not just for the Biennial but for the use and function of a museum, involved performance and process. The art objects - paintings on walls, installations, sculpture, videos - had an almost peripheral relationship within the exhibition; the focus was on the act of art, loosely defined. In that context, viewing the show was as interesting for the experience of seeing others viewing the show as it was for the show itself - it didn't really matter whether the 'performers' were officially sanctioned by the Whitney or had just strolled in to become part of a living tableau for a few hours. For example, the fourth floor of the museum has been transformed into a performance space in which different types of events take place on different days at different times. When I saw it Friday it was covered by a vast black mat, the setting for a dance class. About 35 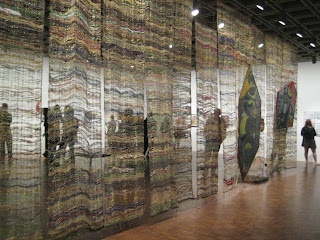 people dressed in sloppy old dance class type clothes were standing or sitting, listening to instructions from one of the class leaders. The lighting was strong, coming from one corner, and the scene had the look and feel of a Caravaggio painting - each ordinary, barefoot character took on unearned significance. Then, in a moment, it all shifted - I moved to a different viewpoint, an order was given, the group quickly formed into four straight orderly lines and a whole different 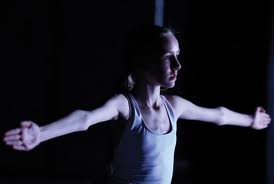 set of associations became relevant. The rest of the floor was a kind of maze of ideas and display. In a tight corner you stumble upon a clever, creepy scene by Gisele Vienne - a blonde boy mannequin holding a bloody-mouthed puppet. The puppet, speaking a tale of horror that floats over you, jumps to life now and then, shaking the boy's hand as if taking possession of his earthly soul. Beyond is a white space set up like a dressing room for the rotating performers, but with touches - the image of a staring sad-eyed woman behind a grill, white patterned panels that might recall the screens in mosques or medieval churches, heavy stage lights sprouting like trees in a corner - that make the room an installation, not simply a serviceable 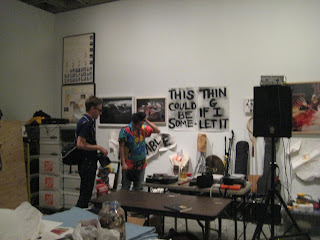 space. It's a one-way floor so you have to track back through the narrow spaces, intentionally forced to confront the tide swimming against you. The third floor installation This Could Be Something if I Let It, is the entire studio contents of the artist Dawn Kaspar who moved everything she owned into the Whitney for the three month run of the Biennial. This is certainly process over product, an aim compatible with modern and some historical art, though here product appears to have been dismissed as not really of interest. While I was there the artist milled in and around the throng of people examining her piles of 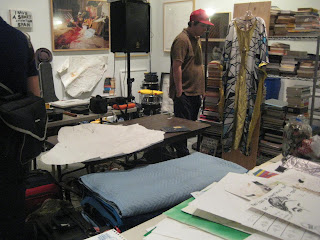 stuff, looking a bit overwhelmed. She claims to have been without a permanent studio for years, thus her art is the move itself. She has replicated the Whitney installation elsewhere, carting everything to a gallery or museum for as long as they will have her. At the risk of being a Philistine, I don't find that enough justification  to be hailed as an 'artist.' But perhaps the labels 'artist' and 'art' are the problem. Both continues shifting and dodging, becoming ever more difficult to pin down. Is that bad? Not necessarily, but neither is it necessarily something to applaud. Maybe the truest thing about this year's Biennial is that it marches in step with us at our moment in time, when so many things - social, political, financial - are hard to figure out.

http://whitney.org/Exhibitions/2012Biennial?gclid=CPuZy-b6_64CFUURNAodkwvY4w
Posted by Marilyn at 12:31 PM