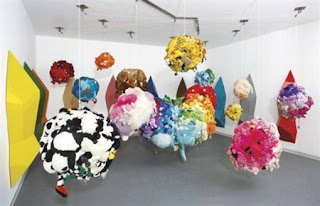 Mike Kelley died this week at 57, an age that's old for some and just getting going for others. Mike still had a long way to go with his complicated, playful, demanding art - he's a big loss. Christopher Knight's obituary in the LA Times gave me the name for this post and made me think about artists who go 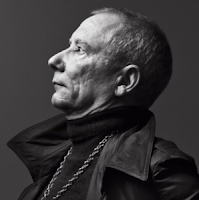 away when we've only begun to understand how they've been changing the game. I can't claim to have known Mike Kelley's work well. I saw it a couple of times in person, at the Whitney and a couple of New York galleries, but the impact didn't fully hit until I started thinking about it this week. Huge clumps of stuffed animals hanging from the ceiling in furry overgrown pods like some kind of colorful fungus? It's a compelling image, rife with associations of childhood - warm, fuzzy, sentimental, and eerily precarious. In his segment of Art21/PBS Kelley talks about the initial response to these stuffed animal pieces 'they all thought it was about child abuse - my child abuse.' The reaction surprised him, but it spurred him to accept 'abuse' - of himself, of 'all of us' as a central subject. Nothing literal though - he takes a crazy, joyous, dizzying path to meaning - installations, 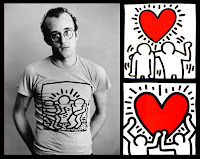 performances, painting, photos - all of it at the same time accessible and out-of-reach. We have to run along to try to catch up and figure it out, especially now that he won't be around to explain. Keith

Haring and Jean-Michael Basquiat - shouldn't we still have them around too? A trio of sad early deaths - suicide, AIDS, drugs - but worlds of inspiring breathtaking creativity - it shouldn't cost that much to be an artist, should it? We all know Keith Haring's bright jumpy creatures, including 'radiant baby' (now available on baby bibs and wall decals) but do we remember that he worked to create peace and health with cooperative

projects and a foundation in his name to support AIDS organizations and children? Basquiat's work is

so rich, visceral, and immediate, with wild combinations of color, drawing, and lettering that form stunningly coherent image/messages. I see his influence everywhere in contemporary art. Andy Warhol was a mentor for him. Another early death, I suppose, but Warhol had pretty much said what he needed to say - Basquiat, at 28, was just beginning to communicate everything he had. And further back? Art History offers Raphael and Masaccio, among others. Raphael, dead at 31 of some

mysterious cause (Vasari says too much rollicking sex with his mistress!) had accomplished a great deal and reached the pinnacle of worldly success, changing the game for artists for centuries, but with his eye and sense of color, it would be wonderful to have seen him develop further past the heavy 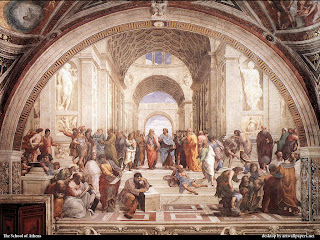 influences of Michelangelo and Leonardo. Masaccio, finally, is the poster child for artists dying too young but leaving an indelible legacy. Dead at only 28, Masaccio is considered one of the three 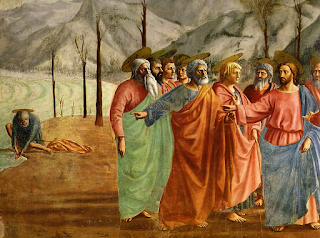 founders of the Italian Renaissance along with Donatello and Brunelleschi. His celebrated frescoes in the Brancacci Chapel in Florence give us HUMANITY in the full glory of life on earth, after all those centuries of medieval ethereal spirituality. St. Peter, his halo a bit unsteady on his head, stands firm and flat-footed on the dirt of the world, scowling at the Romans demanding payment, while Christ, another man of the world sends him back to get the money out of fish. We're there too - humans along for the ride of innovation and progress, led by a visionary who moves on too soon.

Cheers for the fascinating post. They were indeed game changers, I'd put Giorgione and Caravaggio in there too.

If my math still brain works correctly, Raphael was born in 1483 and passed in 1520 - allegedly on his birthday - making him 37. [source: Raphael in Early Modern Sources. JK Shearman]