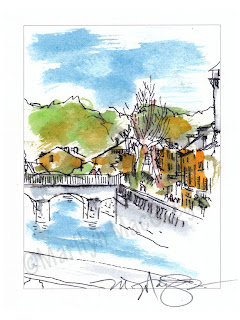 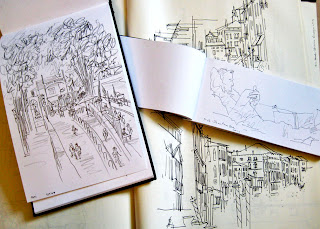 else that seemed a good idea at the time. I have a selection of the hand-colored prints up at Fine Art America - they're fun to do and make nice gifts so please take a look. http://fineartamerica.com/profiles/marilyn-macgregor.html My artist book using a few of my sketches is in the exhibit 'The Decorated Book' at the Athenaeum in Philadelphia. The title of the book is 'Summer Travels - rightly so, though some of the drawings were part of other seasons 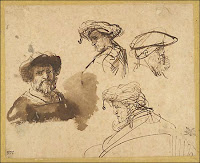 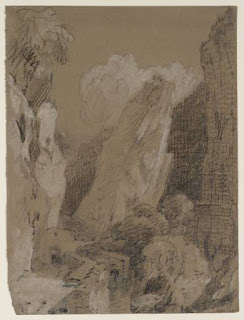 attention to the calendar. As a sketchbook artist, I am in good company, both historic and contemporary. 'Keeping a Sketchbook' (or a journal) has a kind of Victorian ring to it - it may be partly because bound sketchbooks didn't really exist much before that. When Rembrandt, the great master of loose spontaneous drawing, made sketches they were just 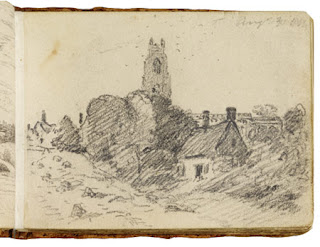 that - loose (both senses of the word) sketches - rather than a bound collection. Like any artist who prizes the collaboration of mind and hand, he used his sketches to learn and explore, sometimes in the interest of a planned work, but surely often for his own enrichment. By contrast, when Joseph Mallord William Turner set out on his extensive travels, his baggage must always have been stuffed with a selection of sturdy books, most if not all of which can now be viewed, cover to cover, page by page, via the website of the Tate Collection in London. A trip through any one of his sketchbooks is a 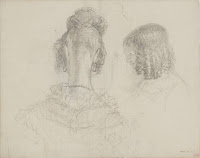 journey through the art of drawing, the ever-curious mind of an artist, the ever-observant eyes of an artist, the daily cares of a 19th century traveler, and the unfolding possibilities of a newly met destination. Look to his earlier books for tighter, more academic drawing, watch him loosen and become confident with any visual challenge, and have the delight of seeing him toss off late sketches with an unconscious grace. The last sketches are almost 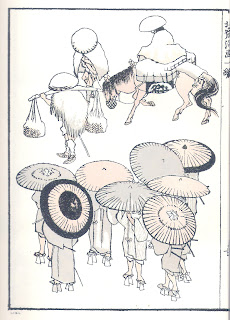 conceptual art - more suggestion than closely written description. Another of the great 'sketchers' is Hokusai, the exuberant Ukiyo-e master of 19th century Japan. A famous published edition of his 'sketches' (the word in Japanese translates as 'Manga',) edited by James Michener, the author, is a most delightful panorama of Japanese life in all its small interesting detail. Unlike Turner, however, Hokusai's 'manga' are not immediate drawings - instead his sketches were first turned into woodblock prints and arranged on the page (some say by Hokusai himself, some by the printers.) Another of my 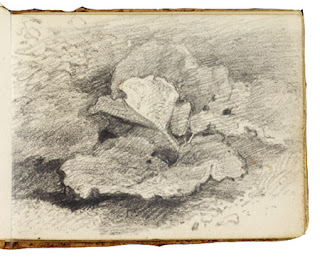 favorite 'Sketchers' is John Constable, the celebrated artist of English Romanticism - I once saw an 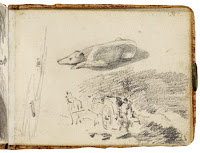 exhibit focused on his sketchbooks in which it was noted that many had been picked up for nothing at London Flea Markets. Artists were along on many famous explorations, including Napoleon's expedition to Egypt, Darwin's epic journey of discovery, and the Lewis and Clark trek

through the Louisiana Purchase in 1805. In a number of these cases the artist was also the scientist - this sketch page of a Salmon is

by Meriwether Lewis.  The art of sketching is alive and well, in case you're wondering. I belong to a group called Urban Sketchers - they started as a blog and now have a world-wide presence with contributors from all over the world. The range of styles and perspectives is breathtaking - I'm always torn between admiration and jealousy! The beautiful watercolor here is by Isabel Fiadeiro of Mauritania. I think I'm the only member from Philadelphia - if anyone else is out there, let me know and we can start our own chapter!

Browse the Tate Collection of Turner's Sketchbooks
http://www.tate.org.uk/servlet/BrowseGroup?cgroupid=999999995
Get to know Urban Sketchers

This is a perfect example of history in your hands. Simple but nicely done. Sketching is really the fastest medium to apply what is in your imagination or what your eyes can see at that very moment. Photographs through drawing or sketching, that is why its important to every person to at least have the basic knowledge when it comes to drawing.

Thanks, Teri - yes, wise words. Plus it's so much fun!