America the Beautiful on Display 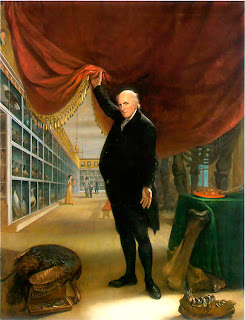 American Art is in the news right now. The Metropolitan Museum in New York has just completed a complete overhaul of the American Wing, one of the brightest jewels in the Museum's ever-fascinating profusion of courts, corners, and dedicated spaces. The official announcement describes 'expanded, reconceived, and dramatic new galleries' - I can't wait to see it and promise 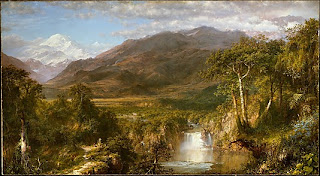 a full report when I do. In the meantime, American Art is also on display in Paris at the Louvre, with the exhibit 'New Frontier: l'art americain entre au Louvre' (American Art Enters the Louvre.) As you can tell by the title, there is nothing reconceived here; this is the first time American Art has ever been shown in the 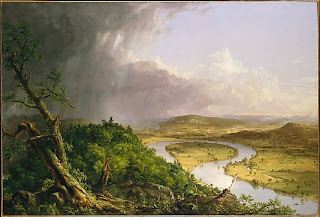 Louvre. The show is a collaboration with three American Museums, and the focus is on the art of the 19th century, particularly that of Thomas Cole. Thus the apt title 'New Frontier'; Thomas Cole is considered the founder of the Hudson River School, the group of landscape painters including Frederic Church and Asher Durand, who painted the expansive (and fast disappearing) wide open 'new' world of the Americas. Phenomenal artists with a jaw-dropping legacy of enormous, magnificent canvases, their brushes often seem to have been dipped as much in Romantic longing as in paint - luminescent lighting effects in many of the works evoke an intentionally moral and spiritual aura. The Met owns several prime examples of the Hudson River School, including Cole's The Oxbow: View from Mt. Holyoke, Massachusetts after a Thunderstorm (1836) and Heart of the Andes by Church. (Parisians will have to travel to New York to see those 19th c. American 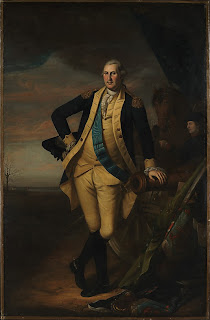 icons.) The Met is not limited like the Louvre, which allows no art in the collection more recent than the 19th century, but most of what you'll see in the American Wing is of the Colonial period to the end of the 1800's,  including decorative arts as well as painting and sculpture. Among the prize works are favorite portraits by homegrown artists, most of whom made their names by starting with study in Europe - Benjamin West (born in Pennsylvania, who stayed on in London to

become Painter to King George III and to train other American artists), John Singleton Copley, Thomas Sully, Charles Wilson Peale, and others. We owe many of our ideas of our Founding Fathers and the beginnings of this country to the portraits by these painters. One of the most interesting discoveries in the Met's on-line American Collection was portraits by men who we know much better as scientists and inventors. Robert Fulton, before he gave himself over to the subject of steam power, was known for his delicate miniatures of fashionable ladies (as in 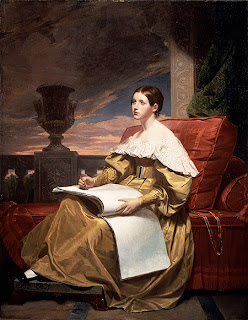 this watercolor and ivory portrait of Susan Hayne Simmons) and especially for his fine attention to hair and jewelry. Samuel F. B. Morse, who like Fulton trained in Europe, tried his best to make it as an artist, but finally gave it up - and invented the telegraph! This beautiful painting from 1836-37 is an allegorical portrait of his eldest daughter, Susan, as a muse of drawing. Charles 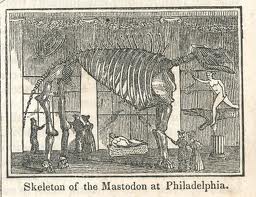 Wilson Peale, another of America's pioneering artists, was as well known in his time for his museum of natural history, which included a mastodon skeleton that he 'obtained' in 1801. His 'cabinet of curiosities' occupied the second floor of the State House (now Independence Hall) in Philadelphia. There is something very right about this championing of both arts and science in one individual that fits the American creation story of idealists with big ideas but with their feet on the ground, ready to roll up their sleeves and do what had to be done. American art in both New York and Paris attests in many ways to the beauty and magnitude of that founding philosophy.
Take a tour of the new Met Galleries