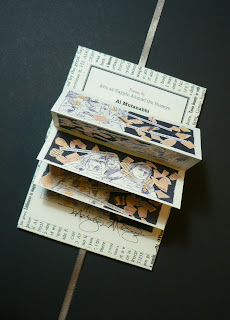 I usually write about other people's art, but this time I want to share a project I've been working on. It's a book - handmade, hand-bound, with prints of original drawings - and I'm doing it as part of a world-wide movement called the Al-Mutanabbi Street Coalition. The 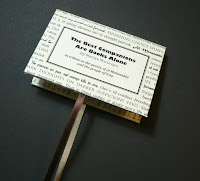 background: There was once a great Arabic writer named Abu at-Tayyib Ahmad ibn Huseyn. Born in the 10th century, he was the son of a water carrier, a born revolutionary, and a court poet for an Arab Prince. His nickname, Al-Mutanabbi, means 'the would-be prophet.'  He was eventually killed, perhaps because, in a poem, he insulted a powerful man. For centuries the Baghdad street named after him was the center of intellectual life, 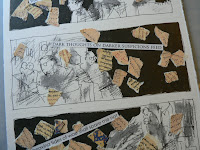 with books and booksellers everywhere, and cafes buzzing with lively literate discussions. But then came March 5, 2007, and life on Al-Mutanabbi Street was blown to bits by a car bomb. More than 30 people were killed, more than 100 wounded - and the heart of literate Iraq was dealt a death blow. Or at least that was the intent. Kill ideas, kill thought, kill expression - it's a rusty old weapon in the violent arsenal of control and oppression. Al Mutanabbi Street reopened for business in 2008, but no one can think it will easily return to normal. For several years, The Al-Mutanabbi Street Coalition has been working to counter the 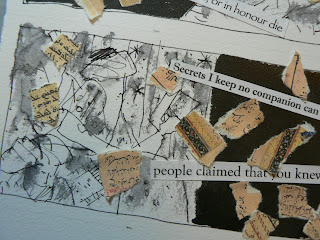 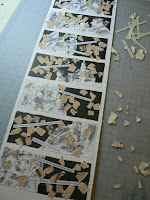 ideas, intellectual pursuits, literary accomplishment, and the dignity of the Iraqi people. The organizers, Beau Beausoleil and Sarah Bodman, have been gathering letterpress printed broadsides and artist books, giving talks, presenting exhibits, and in many other small and large ways, keeping the spirit of Al-Mutanabbi Street alive. I'm told that some early 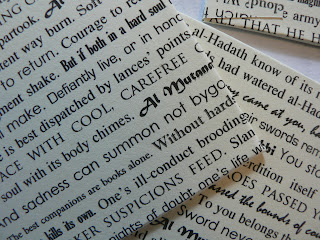 submission were focused on war. I hope mine won't be seen as war-focused, though it is impossible not to have that idea hovering nearby. I purposely chose images from daily life, including a sketch of Al-Mutanabbi Street before the blast, along with a mosque, women on the street, men in a cafe - and an American soldier, because that has also been, for too long, part of daily life there. I could not get the image of all that tragic but beautiful Arabic confetti 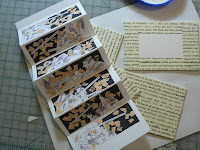 showering down after the bomb went off out of my mind, so I've made that important. The cover text and text across the images are English translations (by Nancy Coffin) of 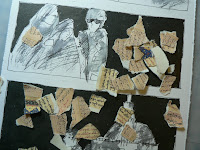 Al-Mutanabbi poems - beautiful language but much of it chillingly prescient about harm and violence. (The title 'The Best Companions are Books Alone' is a quote.) I reduced the size of the images when I printed them before I folded them into the accordion - I wanted to make the book something that could be hidden in a pocket if necessary. The final size is about 3" x 4 1/2, opening to 10." My book is one of three I'll send them - along with the others, one of mine will be donated to the Iraqi National Library in Baghdad. The other two will become part of the exhibits and displays.