Goya - New Addition to a Complex Body of Work 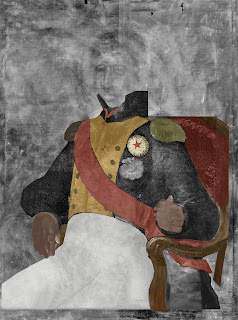 Goya has always been hard to pin down. The discovery of a 'new' portrait, albeit hidden under an existing one, just adds to the complex story of this fascinating artist. Who is among the most modern of 'old masters'? Goya. Who made his living painting fawning portraits of powerful court patrons? Goya. Who is one of the most subversive of all painters? Goya. Who was one of the first realist painters? Goya. Who painted the darkest, most terrifying images in all of art? Goya. And did I mention that he had 24 children?

The new painting, an unfinished formal portrait of a man wearing the important bling of a Napoleonic officer (it may even be Joseph Bonaparte, appointed King of Spain by his brother the Emperor) was discovered with the fresh out of the box Scanning Macro X-ray Fluorescence Spectrometry, a technology developed in the Netherlands. This is a technique that "fires high-energy x-rays at the painting, which energizes the atoms causing them to release their own x-rays. By observing and analyzing this information, researchers are able to develop a color map of what lies beneath the top layer of paint. The result shows remarkable detail about what was originally on the canvas."(thanks to Geekosystem.com) 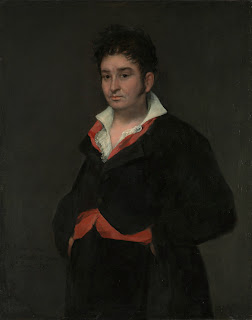 The portrait on top - the only one that counts for most of us - is one of Goya's masterpieces and the only painting by Goya in the Netherlands (at the Rijksmuseum.) It is a beauty - the subject is Judge Don Ramón Satué, a man in whose face intelligence, skepticism, compassion, and confidence all jockey for position. His hair is fashionably feathered forward, his black velvet costume, accented with white ruffles and red sash, is stylishly comfortable - no formal robes for this judge. It was painted in 1823, ten years after the French were driven out of Spain. It seems probable that Goya was 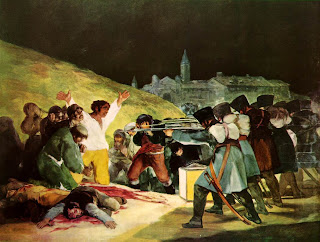 commissioned to paint the underlying portrait during the French occupation; one guess for the reuse of the canvas is that he needed to get rid of any evidence of collaboration once Ferdinand VII was restored to the throne. It's unlikely that Goya would have cooperated with the Napoleonic forces willingly. His powerful The Third of May from 1808 is an eyewitness account of injustice; it screams out Goya's protest against the inhumanity of that occupation with his pitting of an innocent man - clearly marked as a symbol of all innocence by his bright white shirt and crucifix pose - against the faceless brutality of a uniformed firing squad.
Goya lived at one of the cruelest and most crucial cusps of history, a time when old tyrannies were exploding in revolutions. Harsh, inhumane oppressions in response, did little to stem the tide of 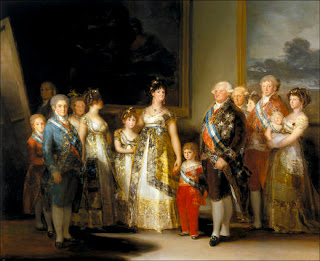 inevitable progress towards equality and democracy, but led to wide-spread misery for many innocent people. Goya witnessed all of this - in his work we find the cycle of history. The golden, sunlit days of court life edge into clear-eyed observations and documents of the wealthy and powerful, perhaps with a touch of muffled but barbed criticism, as in his celebrated portrait, The Family of 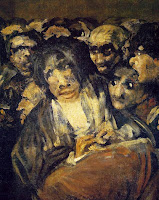 Carlos IV. The march continues - he spares no detail in his witness to the unspeakable horrors of war with his incredible series of etchings, The Disasters of War, and then we watch him descend into a personal world of darkness, losing his hearing, going into exile in Bordeaux, and creating the searing, unspeakable Black Paintings and Horrors.

Click the link below for an interactive look at the new/old Goya portraits (thanks to The Guardian UK)
http://www.guardian.co.uk/artanddesign/interactive/2011/sep/20/goya-painting-satue-rijksmuseum-interactive?intcmp=239
Posted by Marilyn at 1:19 PM