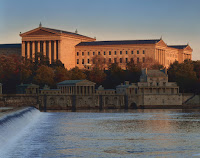 The Philadelphia Museum of Art, stately and grand, perched on its acropolis like the literal and figurative temple of art that it is, contains never-ending pleasures of great reach and subtlety. You may be aware of its stellar European and American holdings - The Gross Clinic by favorite son Thomas Eakins is a highlight - but you might be surprised at its strengths include breathtaking Eastern art and architecture and a fine contemporary collection. And, more than some other major museums I could mention, PMA makes an effort to reach out to the local art community, a move appropriate for a city with some of this country's top art schools, most within walking distance of the museum. At the moment, the result of this effort is the small but intriguing show Here and Now: Prints, Drawings, and Photographs by Ten Philadelphia Artists. I'm a works on paper artist myself, so this show was right up my alley. The premise is - works on paper by a selection of local 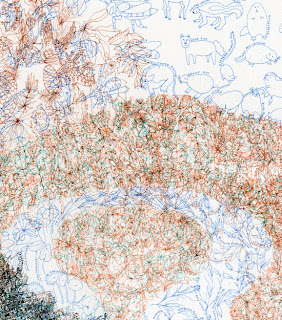 artists of sound repute to one degree or another "ranging in age from 25 to 50" (an arbitrary limitation that strikes an oddly foolish note.) Two long-term professors must fulfill the upper limit (their dates are conveniently left off the signage), but most are young, ambitious, and very up-and-coming if not 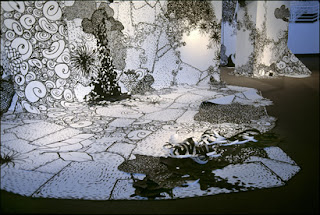 already arrived.  Two of the artists exhibit regularly at Gallery Joe, an excellent Old City showcase for works on paper: Mia Rosenthal was my immediate favorite. Her obsessive drawings pull you in close to intricate twists and turnings on a hunt for tiny little creatures that are hidden there, or it may be that you imagine them hiding in the foliage of her fine spidery lines. I especially loved the idea of - and the fact too - of drawing the entire contents of a 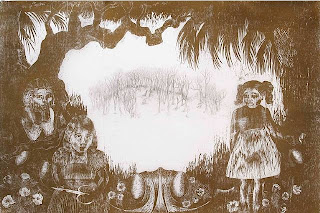 sample size box of Rice Krispies, laid out Krispie by Krispie in a sinuous necklace of precise, clean, detail on creamy paper. Astrid Bowlby, the other Gallery Joe artist, is known for pushing her drawing off the wall to create Alice-in-Wonderland-like environments. Her offerings for the PMA show are fairly tame but they give the idea. In contrast to the small scale of Rosenthal's work, Serena Perrone works large; her woodcuts have a rugged, energetic quality that she tempers with fine detailed drawing in gold point and silver point. It's a highly unusual pairing that is at once startling and 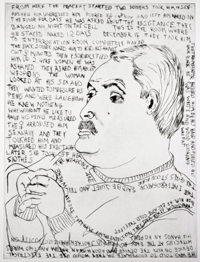 soothing. Daniel Heyman's provocative drypoints are art politics in action - reportage portraits of former Abu Ghraib prisoners, scratched into a metal plate (writing backwards) on the spot as the men related their stories to an American lawyer. The work has the black and white urgency of this morning's newspaper - a metaphor that's fast disappearing, but fitting for evidence of a world that is out of touch with progress.
The 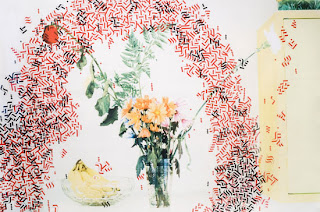 photographs in the exhibit moved me less, but that may be the viewpoint of an observer partial to drawing and the work of the human hand. Isaac Tin Wei Lin managed to straddle the line between the two. His bold ink cyber-patterns in harmony (or disharmony) with pastel toned photographs are visually arresting.

(Thanks to Gallery Joe for Bowlby and Rosental images)
Here and Now: Prints, Drawings, and Photographs by Ten Philadelphia Artists is at The Philadelphia Museum of Art until December 4, 2011.
http://philamuseum.org/exhibitions/752.html