So this is Paradise - Buddhist Art at the Asia Society 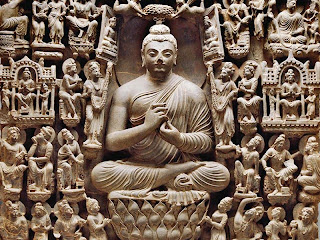 The lights are dim, carpeting keeps footsteps quiet, but the exhibit of Buddhist Sculpture at Asia Society is, in fact, a loud statement of courage and perseverance, as well as the power of art, in the face of a difficult political situation. The title of the exhibit, The Buddhist Heritage of Pakistan: Art of Gandhara, explains the problem - this show almost didn't happen. Melissa Chiu, director of the Asia Society Museum, said in a NY Times article “I persisted because this is a unique opportunity for us to show the cultural heritage of Pakistan at a time when U.S.-Pakistan relations are probably at their lowest ever.” And of course, the beauty of it is that, once inside and alone with the art, the 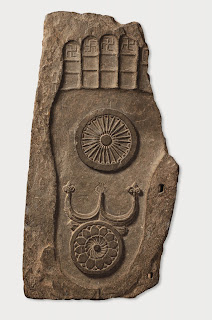 world with all its hatreds and anger drops away, and the powerful poetry of this ancient work speaks for itself. Much of it comes from the Lahore Museum, and many of the examples date from the first centuries CE - others are even earlier. The name Gandhara, an ancient kingdom at the junction of what are now Pakistan and Afghanistan,  signifies an important watershed for Buddhist art. 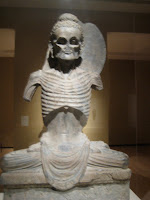 Here was the nucleus of an intermixing of Asian and Western traditions, prompted by trade along the Silk Road and the Hellenizing influence of Alexander the Great and his Roman successors. There was no human Buddha image before the art of Gandhara, only symbols such as the Buddha's footprints or the Dharma Wheel. (yes, those are swastikas in the toes - it is an ancient benign symbol of cosmic order) With Gandhara begins the new - now ancient - tradition of iconic statues and classical narratives that follow Greek forms of storytelling. Buddha became the calm figure of infinite grace that we often see seated on a lotus, his hands arranged in compassionate mudras, his empty ears stretched by the rich jewels he gave up to find enlightenment and set a path known as the Middle Way. There are chunks of ancient buildings in the exhibit, reminiscent of friezes 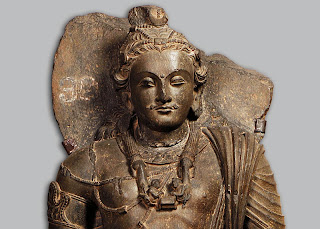 on Greek temples, telling of the Buddha's conception by an elephant, his escape from the royal palace of his wealthy father, his miracles and teachings. With the Buddha are statues of Bodhisattvas, the holy figures that have not yet left the world: the most beautiful is Maitreya, still draped in jewels, who is prophesied to become Buddha on the next turning of the cycle. The opposite of beauty is death, represented by a rare statue showing the Buddha as a virtual skeleton whose veins clearly show on his bony forehead, coming to understand that the path of the ascetic is not the Way - it's a startling, compelling image. If only the sculpture showing 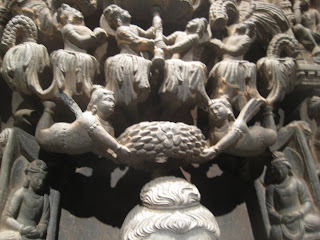 the Buddhist Paradise had made the trip it would still have been a complex and interesting show. This piece is crammed with figures, above, below, and flanking the serene seated Buddha, who is being crowned with what looks suspiciously like a wreath of laurels. Paradise seems to promise much spiritual but also material comfort: Buddha still has no jewelry and fancy trappings but he's the exception. It looks like a comfortable place, even a bit like Hawaii, if we can trust the figures who look to be wearing grass hula skirts. This is a good place to see clearly the mix of cultures: the infrastructure is a mix of Roman arches, Greek columns, and Lotus Thrones. The exhibit is at Asia Society Park Ave and 70th Street, NYC, through Oct 30, 2011.
http://sites.asiasociety.org/gandhara/exhibit-sections/buddhas-and-bodhisattvas/

Dear Marilyn,
Thank-you for including this important exhibition in your wonderful blog!
Best Wishes,
John

Thanks, John. I appreciate your attention!