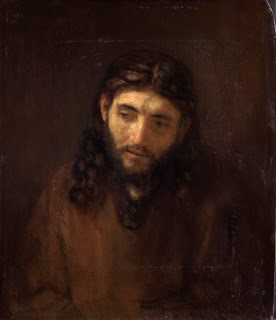 It's hard to imagine coming face to face with a celebrity: what would you do if Angelina Jolie suddenly showed up at your local supermarket? And when it comes to Jesus - famous, divine, historical//mystical - it's impossible. Art doesn't help. The model most people know, especially if they went to Sunday School, is a sort of candy-colored pretty Jesus who looks to be of vaguely 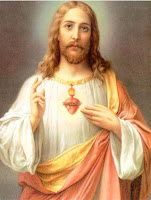 Scandinavian heritage. Even 'good' art, and there is an enormous amount of good religious art - art history would be nowhere without Christian imagery - keeps Jesus at arm's length or further. Byzantine versions set the standard for the stern aloof Jesus, very beautiful, but definitely not someone you could sidle up to to ask for a favor. A most famous Byzantine image is Christ the

Pantocrator - the Judge - one who appears disinclined to give time off for good behavior. The other extreme is Guido Reni's gentle, painfully beautiful 16th c. Jesus, who suffers great agony without any messy blood or dirt. But then comes Rembrandt. A traveling show, called Rembrandt and the Face of Jesus is now at the Philadelphia Museum of Art, after a stay at the Louvre, and before it goes on to Detroit. It's a small, focused show of quiet pleasures for a Rembrandt lover like me, with a good audioguide to give background on why his versions of Jesus are so revolutionary. First of all, this Jesus is Jewish, just as the real Jesus was. 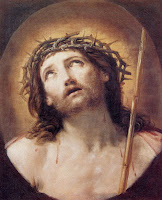 Rembrandt whose house was smack in the midst of the Jewish population of Amsterdam, delighted in the fresh possibilities of this exotic group, newly arrived after persecutions elsewhere. It is said that he became close friends with several Jewish neighbors, and he certainly found models for his oh-so-human Jesus. There is a wall of small studies of heads in the exhibit, the same 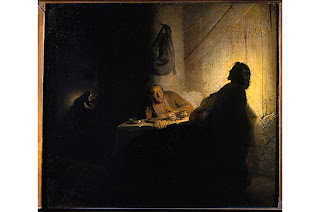 but different by a slight twist of the neck or a shift in the glance. As I made my way from one to the next, the humanness of Jesus made itself felt, and by the end I could believe him fully capable of sadness, compassion, maybe a little anger, and even a head cold. Rembrandt is the most unusual of religious painters for a number of reasons. Religious painting, long associated with the Roman Catholic Church, was far out of favor in fiercely Protestant, fiercely and newly independent 17th c. Holland. Icons and saints had been banished from the churches; artists painted portraits, 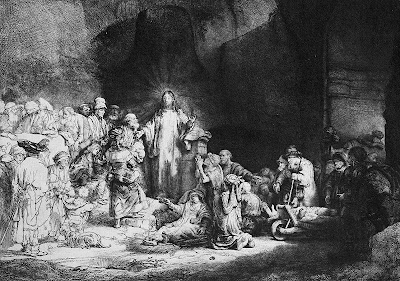 landscapes, and earthy genre scenes. Rembrandt painted those too, but he also looked to the Bible, reading it for himself and looking around to see its lessons writ in the faces and gestures of his fellow Amsterdamers. They may wear the requisite Biblical gear, but his saints are a little dumpy, with fleshy Northern faces, and his Jesus is local, and human.
Note: Rembrandt was one of the greatest printmakers in all of history, and there are several etchings in the exhibit. This one, officially titled "Christ Preaching" but known as "The Hundred Guilder Print" because of its high price, is one of his masterpieces.