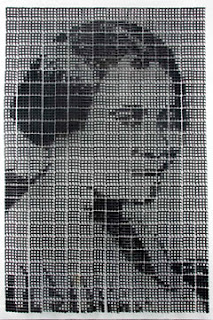 There's a lot of art to see in Old City Philadelphia, but currently there are two shows that stand out. In media and execution they're at opposite ends of the spectrum but if you're interested in thoughtful, careful work by sophisticated professional artists, you should see them both. Dust and Shade, Drawings by Charles Ritchie, at Gallery Joe, brings you into a quiet, small-scale world of finely observed detail. Ritchie has 4 sketchbooks in the show - see them first, and you'll understand a lot about his approach. His rich delicate watercolors and tiny spidery handwriting bring to mind 19th century Victorian sketchbooks, but when you examine the framed drawings on the wall you see that he brings the same detailed awareness of the

possibilities of the ordinary to his finished work. A dark night, a suburban house under a streetlight, a scrim of bare branches - this is Ritchie's touchstone. The same quiet neighborhood (his own, in Maryland) figures in many of the works. There is a 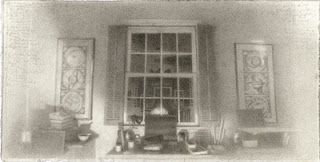 suggestion of eternal fall, but then comes a scene with snow - the white mounds feel inevitable, as if they're guarding the house through the winter. Subtle tricks with the light and shadows give a slightly surreal feeling and bring to mind Magritte's painting, Empire of Light. Interior scenes are soft, graphite stills of life interrupted for just a moment, but look closely and watch the tiny spidery handwriting emerge around the edges. You're back to Ritchie's sketchbooks and his gift for detailed observation of life as it happens. 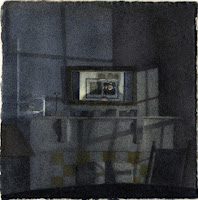 Snyderman-Works Gallery, an extraordinary, impeccable place that has been championing fine art/craft for almost 50 years, is showing Sonya Clark's deeply intelligent mixtures of craft, art, history, and tongue-in-cheek humor. Like Ritchie, Clark has a touchstone in the ordinary, but for her it's not the romance of a familiar neighborhood, it's the edgy duality of a simple plastic comb. The stunning centerpiece of the show is a wall-hanging portrait of the African-American entrepreneur C. J. Walker, who, in the late 1900's, made a fortune with hair products, including one that helped prevent scalp disease. From a distance it appears photographic, perhaps an extreme enlargement of a daguerrotype, or even a cut paper silhouette, but in reality it is made of hundreds of the banal black plastic combs that figure in many of Clark's works. For this portrait she manipulated her medium, breaking out teeth and crisscrossing the combs to give her a surprisingly fluid vocabulary. Hair, real or imitated with yarn, is at the heart of the work on display. Some 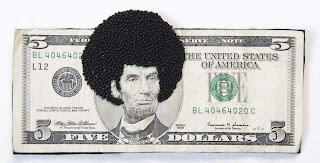 examples are blatantly humorous - Abraham Lincoln on a 5 dollar bills sports a 70's era Afro - but peel back the layers and you'll find the Emancipation Proclamation, the plight of freed African slaves newly dependent on making an elusive, money-driven living, etc - to the present day. 'Diaspora' appears fairly simple at first too - tiny white canvas squares, each with a long tail of dark braid, cluster on a wall, but watch and think and you almost see them start to move, questing for escape or betterment, and leaving trails of identity and tears. I was especially struck by 'Comb Carpet' a dark square that is, as it states, made of combs pointing their little spikes upward. It 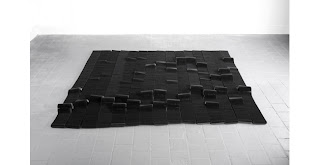 looks like black Astroturf, but as you imagine yourself settling down for a picnic or a nap, you feel the jabs and notice the ripples that disturb the surface. No easy seat this - this is history in subtle, pointed relief. Clark's work is significant - the show at Snyderman-Works is her first one-person show in Philadelphia.
Dust and Shade, Drawings by Charles Ritchie is at Gallery Joe through October 22.
Sonya Clark is at Snyderman-Works Gallery until November 19.
Note: Old City Philadelphia is gritty, lively, edgy, exuberant - a perfect place for the battery of energetic art galleries, studios, hip little shops, and brash neon bars that defines it. First Friday in Old City is, month after month, the best city art party I've ever seen. If you haven't been to it, you're invited, so go!
http://www.galleryjoe.com/exhibitions/current/2011/09/24/dust-and-shade%3A-drawings-by-charles-ritchie
http://www.snyderman-works.com/exhibitions/sonya-clark
Posted by Marilyn at 2:37 PM