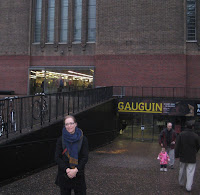 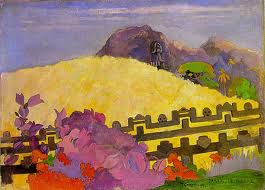 I've just gotten back from wintry England, as charming and interesting a place as ever, especially as the trip involved visits with many old friends. There is nothing better. The variety and quality of art on view in London was the icing (marzipan, of course - it was everywhere) on the cake. Gauguin was the headliner, a big splashy get-your-tickets-ahead-and-still-stand-in-line exhibit at the Tate Modern. Other delights were the exhaustively fascinating Diaghilev show at the V&A with wonderful drawings and set designs by a raft of artists including Leon Bakst, Jean Cocteau, de Chirico, and Picasso, the overhead installation of Edmund de Waal's minimal white ceramic vessels set into a red ceiling rim (also at the V&A), the surprise of finding one of Rembrandt's most powerful self-portraits deep in the wilds of Hampstead Heath at Kenwood House, and a superb modern drawing show at the British Museum. Quieter and smaller than the Gauguin but just as spectacular was an exquisite setting of Cezanne's Card Players, with sketches and related paintings, at the Courtauld Gallery. The Gauguin show took up most of the 4th floor of the gigantic power plant that is now the Tate modern; fighting crowds through room after room was a test of stamina, but there 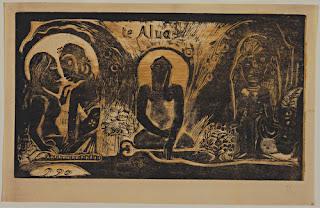 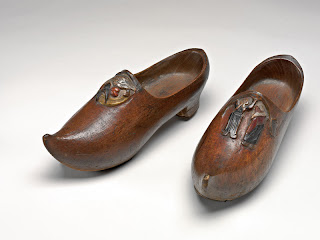 were plenty of rewards for hanging in. Arranged by theme rather than chronology, the exhibit presented multiple Gauguins - self-portrait subject, failed stockbroker and family man, native of Brittany, spiritual seeker, etc. Complementing the rooms of paintings, drawings, and sculpture were displays of family photographs and odd bits of this and that - one of my favorite was a pair of Breton 'sabots' - wooden shoes - that Gauguin made for himself with colored motifs as artistic signatures. They were about a size 12 mens, and beautifully carved. These homey touches, with some measure of success, filled in the outlines of an artist who often seems to hover a bit beyond solid understanding. The show presented many masterpieces, some very familiar and some less so. (Many of the best were from American museums.) It was especially gratifying to have a chance to see a good deal of Gauguin's graphic work. A virtuosic printmaker with a special affinity for wood, he made use of a block print technique that meshed perfectly with his explorations into 'primitive' emotions and mythology. One room was devoted to prints from Noa Noa, the best-known and most complete of his books - the mystical feeling he was after was palpable in the small, dimly lit gallery. Color, of course, is one of Gauguin's signatures, serving his vision (now, thanks to him, ours too) of tropical landscapes and their equally luscious inhabitants. One painting after another repaid one's patience through the many rooms with rich, gorgeous shades of pinks, yellows, oranges, honey browns, deep violet blues. When he left Europe to seek out his tropical paradise in Tahiti he was disappointed to find that 'civilization' had gotten there before him and had wiped out much of what he believed he could find. Still, despite banal struggles with taxes, disease, and poverty, his powers of invention created what he sought and what he left for us to savor; a timeless place of deep mystery, lush sensuality, and infinite dreams. Dreams, of course, as he showed time and again, can be dark and disturbing; his color is enticing but even more, the mysteries of Gauguin's visions keep beckoning, asking us to look again and think further about what may or may not be there.