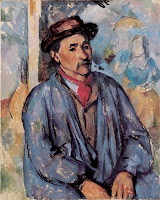 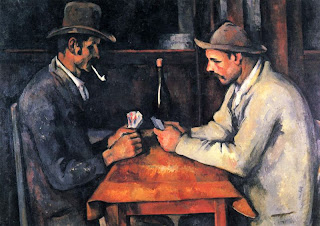 London is receding into the distance as life in Philadelphia takes over and my new theme-based Art History course at Drexel University picks up speed. But I can't get the Cezanne show I saw at the Courtauld out of my head - not that I'd want to. I love small concentrated shows like this. Big blockbusters have their place, and I'm all in favor of what they must do for museum budgets, but the experience at the Courtauld was the kind of thing that is much more pleasant and satisfying. *read to the end for good news about where the show can be seen next! Here the focus is on Cezanne's great Card Players series, with some large multi-figure canvases and many related works - sketches and paintings of individual figures. By the end I was not only an even more slavish fan of Cezanne's color and relationship with paint, but on a first name basis with the earthy, homely men who populate the array of paintings in the series. There's Paulin Paulet, with his trademark droopy mustache and crumpled-looking hat; he appears in all of the compositions from the two-figure versions to the largest with 5 figures (owned by the Barnes foundation, which did not loan it for the exhibit.) And le Pere Alexandre, an old gardener who was another favorite model - it's easy to see his appeal for Cezanne. In his workman's blue smock and red neckerchief, with his stolid, resigned expression, he conveys a dignity that is solid and timeless, like that of Cezanne's mountain, St. Victoire. It is thought that each of the models posed separately in Cezanne's studio at the Jas de Buffon, the family estate that figures in many of his landscapes - and that Paulet and Pere 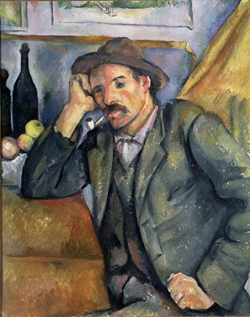 Alexandre were paid three francs for their trouble. Like chess pieces in a game of color, light, and form, Cezanne used these key figures to create various arrangements around a simple wooden table, sometimes covered with a cloth and sometimes not, adding figures, changing positions, inserting props and details like clay pipes and wine bottles. Initial studies, like that of Pere Alexandre (Peasant in a Blue Smock) have some of the fresh, sketchy brushwork of his watercolors while the finished compositions have his characteristic buttery layering of intricate color harmonies - the patches of green shading into the complement of violet, his rich beautiful blues set off by a bit of orange. Cezanne had a way with color that gives the eye and even the soul a sense of deep satisfaction. Solid, eternal - the Ancient Egyptians would have understood easily what Cezanne was doing. 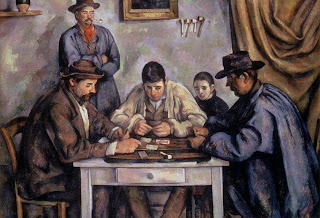 This card game will never end - like the timeless, endlessly beautiful art of Egyptian tombs, these men will spend forever locked together in their small space, anticipating the next play of fortune while we stand in amazement looking on.

*Great News! The Metropolitan Museum of Art, which co-sponsored the show, is next - Cezanne's Card Players opens February 2  and will be on view until May 5, 20ll.
Posted by Marilyn at 12:44 PM