Angels for You - Happy Holidays!

Angels seem a little more real, a little closer to us at this time of year. And don't we need a few more angels in this tattered world, guarding us and keeping the peace? Some of you have asked about the origin of the angel on my Peace Card so I thought I'd share that one and a few other favorites as a way to spread wishes for peace and good feelings. 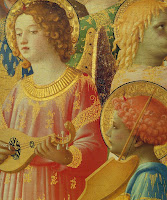 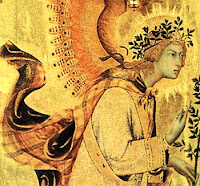 Angels are not only a Christian thing, as many believe. The idea goes way back, about 5500 years, to the early peoples of the Near East who first organized religion into rituals, rites, and identifiable deities. As in most religion, they placed their gods and goddesses in the heavens, and with irrefutable logic identified birds as messengers - winged go-betweens at home in both the earthly realm of humans and the divine realm of the gods. I think you'll agree that it's not a far distance from there to the fabulous winged panoply of gorgeous creatures flying around in the clouds, carrying harps and singing their hearts out. There are angels in the Jewish and Islamic tradition as well as the Christian, though thanks to the Christian emphasis on images, most of the angels we know and love come from Christian art. And angels are not only sweetness and light, either - the Archangel Michael carries a big sword and has a temper - he's the one who drove Adam and Eve out of the Garden of Eden. In this painting by Perugino, however, his sweet soft face and pretty polished armor belies the tough reputation. His fellow archangel Gabriel, by contrast, is the 'Good News' angel - here he is in a detail from Simone Martini's wonderful annunciation bringing surprising tidings to a young woman named Mary. Fra Angelico (the inspiration for my card) is the go-to guy for angels - no one does them better. All my best wishes for a happy and peaceful holiday season - may you have an angel always at your side.
Posted by Marilyn at 11:23 AM