10:47 pm Friday May 28
There are four of us, fresh from a great night of ballet at Lincoln Center. Instead of a late night drink we bustle into a cab and hurry across town to the Whitney Museum. One of us, an urbane, cultured fellow who has lived in New York City for about 35 years, says "I've never been here before." 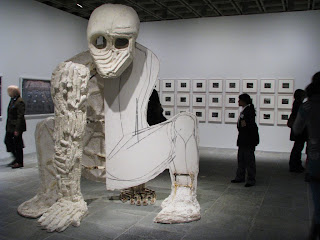 Looking around at the mismatched throng of ages and types, I'm sure he isn't the only one. I can't remember the last time I saw so many people at the Whitney. There's a party buzz that makes the crowded lobby feel like somewhere else, someplace more urgent and immediate than a major art museum. The reason is the late night hours, part of artist Michael Asher's Biennial project of keeping the Whitney open for 72 hours straight (downsized from his proposal to have it open 24 hours a day for a week.) The 'what you wish' entry doesn't hurt either: I pull out a generous twenty and spring for our group. We have about one hour left to see the Biennial before the Whitney returns to normal. 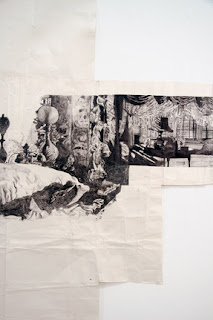 The first exhibit we experience (contemporary art is not seen, but experienced) is a very loud installation on the first floor, with the artist Ari Marcopoulous as live DJ, surrounded by amps, speakers, and cables. I don't get the point, if there is one, and I'm glad to escape the noise by getting into the elevator and heading up. But where? Plain lists of names for each floor are a hint I don't recognize about the organization (or lack of it) for the entire exhibition. We get off at the fourth floor and start wandering. Wandering is obviously what you're meant to do - stumbling around walls, poking into little rooms, dodging dividers of various kinds. One room has a collection of flower paintings by Charles Ray. They're nice enough - colorful, linear, rhythmic - but seem little distinguished from greeting card quality flowers. We come across a clutch of viewers standing around a big old white car, riveted by a newsreel of sad American moments projected onto the windshield. Lorraine O'Grady's sepia-toned diptychs of Charles Baudelaire and Michael Jackson take up a wall, adding to the elegiac feel of the gallery. Together they represent what must be one of the exhibit themes, a fascination, more than a little morbid, with fallen idols and wasted dreams. The impulse feels maudlin, closer to the 70's than 2010.

Down one level we're met by Thomas Houseago's large clunky sculpture of a creature sitting on its haunches. Its half-human nature is emphasized by its half-finished state - part sloppy plaster, part sloppy drawing - mostly white. There is an uneasy implied judgment there, but I'm not sure it was the artist's intent. The explanation has more to do with the materials and a reference to the riddle of the Sphinx. There's plenty of video and photography, none of which stands out for quality or significance. A yoga-type class puts itself through its paces, and a male dancer arranges and rearranges his body. 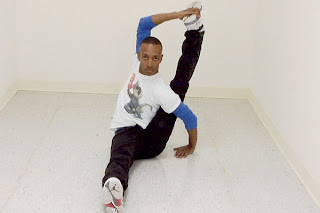 Continuing down through the final floors we see a variety of media and even a few ideas, which by this time I've come to think are rare commodities in this Biennial. Out of the entire show, the large crumpled ink drawing of a claustrophobic interior with a woman mourning a dead husband, by Dawn Clements, speaks most sincerely of sustained commitment to thoughtful intention and execution. It's a tour de force of drawing, with a stubborn traditional pride in the hand on the page, yet thoroughly contemporary in presentation with its wrinkled, insouciant mismatched edges. It was a relief to come across it in the midst of the lightweight confusion of this Biennial.

Confusion, in fact, seems the best way to sum it all up. Perhaps the idea was to match our confused cultural moment of lost hopes, lost bank accounts, lost homes, and uncertain futures. The scattered notes of conservative tradition - Charles Ray's flowers, Maureen Gallace's tame little landscapes - may have been meant to be reassuring, but are merely discordant. The art here seems to have lost its way, as did the direction of the Whitney for this Biennial.

The ending dates for the Whitney Biennial, in keeping with the theme of confusion, are confusing. Two of the floors closed May 30. The other three close on successive dates through the month of June.
Posted by Marilyn at 12:14 PM

Well observed and well articulated. I concur with the critique. sjg