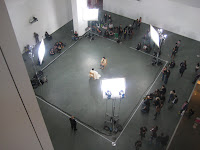 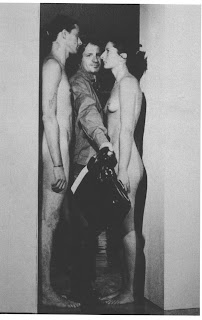 We've all read about it and seen the pictures. Naked people standing in doorways, a middle-aged woman with long dark hair sitting still in a chair for 7 hours straight, staring down anyone who dares to sit in the empty chair opposite. It's the MOMA retrospective of performance artist Marina Abramovic, entitled The Artist is Present. And she is very definitely present, in person and by proxy. I had dragged my feet about going to this show, figuring it might be more interesting just to read about it than to see it. But I was wrong and I'm glad I got there. I was prepared to be mentally jostled, to be pushed around and made uncomfortable simply for the fact of being uncomfortable. What I wasn't prepared for was the spirituality. The first thing I saw as I came up the stairs was the arena of the MOMA atrium. Next the sight of the artist - Marina Abramovic in her chair, starkly lit by hot photographers' floodlights and surrounded by a curious mob. The lights and the crowd contributed to a warm atmosphere and there she was in a great white wool cape over a long sleeved high-necked dress that spilled in a broad puddle around her feet. Her dark-featured face was slick and shiny, set in an impassive expression that gave no hint of inner activity. She reminded me of nothing so much as a polychrome, carved wooden virgin from the 12th or 13th century. And the more I saw, the more the image seemed to fit. As I continued through the show, the medieval quality of what she's been doing throughout her career is palpable; public displays of mortification of the flesh, incredible will under tortuous exercises in self-martyrdom. Watching her sit in her chair, lonely and alienated in the midst of hordes of strangers, placidly performing a ritual that few understood while maintaining an unearthly kind of poise and self-control - I've never had such a clear physical understanding of the medieval concept of someone who is not quite from this human sphere - a spiritual being. It made sense that her parents were war heroes (WWII) in her native Serbia and her great-uncle was a patriarch of the Orthodox Church - and later a saint. The intensity of a higher calling informs everything she does, as does the sense of human life as a trial. The naked stand-ins for Abramovic in recreations of earlier events are all young and beautiful, god-like virgins and young men ripe to people Bosch's nightmare vision of human sexuality and temptation. The two naked woman between whom I squeezed from one room to the next were clean and lovely, but their slight human odor in the warm gallery seemed intentional - a reminder of our baser material. The hardest reenactment to look at for me was the young girl splayed against a spotlit white wall ten feet above viewers' heads. Perched on a tiny bicycle seat with only small blocks to support her spread legs and feet, her arms held out and up, she was an obvious Christ - even without nails the pain and discomfort was all too easy to imagine. Films show Abramovic herself in some of her best known performances, including Balkan Baroque, where she spent hours scrubbing mountains of bloody cowbones (the bones were on display), and the frightening spectacle of her cutting of a star into her own belly. Impossible to watch but fascinating. The discomfort of viewers showed itself in all kinds of ways - giggles, grumbles, smart remarks, sober silence. It must have been the same for people watching those medieval flagellants in the 14th century - a profoundly unsettling experience. Contemporary art is a strange place and it's difficult to sort out the real from the merely exhibitionistic - this, for me, was real. My lasting image of the show will be the young woman who sat down across Abramovic just before I left. As though planned, she was a kind of mirror image, physically and metaphorically - young, soft-faced, dressed in dark, modern tshirt, jeans, sneakers - but her brown hair was in the exact same braid as Abramovic's, hung over the same left shoulder. Wearing a slight smile she might well have been staring beyond the present deep into the mystic, timeless presence of this strange disturbing artist.
Posted by Marilyn at 5:46 PM

I really wanted to see this show. I've always been interested in the intersection of visual art with performance art. Thanks so much sharing your experience!

amazing, moving show. I'm so glad I saw it. Your discussion of it brought it back and deepened the experience.