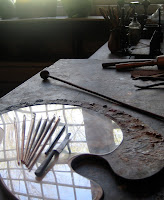 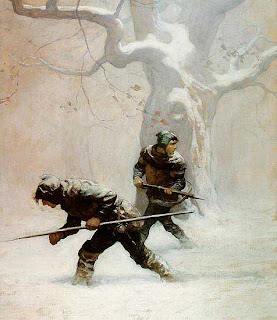 I was at Chadd's Ford this weekend, paying a visit to the Wyeths. That would be N. C. Wyeth, greatest of American illustrators, and his legacy - his work, his home and studio, and his family, including son Andrew and grandson Jamie. It was a beautiful day in a beautiful part of the country, and the house and studio, in essence untouched from when the family was in residence, were fascinating. N. C. Wyeth was a giant in many ways - big man, big ideas, big talent, an outsized imagination that willed living, breathing worlds of adventure and excitement onto a flat painted surface. His studio, full of props, paints, and mementos, is basically untouched since the day in 1945 when he was killed by a train, just down the road, as he sat in his car pointing out sights to a young grandchild. His long smock coat hangs to one side of his work area in front of the north-facing window wall. The right sleeve is conventionally worn, but the left sleeve is still caked with paint where he wiped his brushes as he worked. At the back of the studio is the extension, built later to accommodate the mural panels he painted for a Philadelphia Insurance company - when the building was renovated the murals, an allegorical series telling the story of William Penn, were returned to the Wyeth foundation, so one sits in place as he would have painted it. On his smaller easel is a painting of a scene in George Washington's life, blocked out and colored, but unfinished. 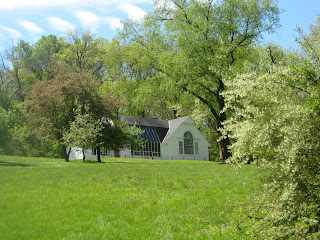 It was a thrill to see original paintings and drawings for Treasure Island, Kidnapped, The Black Arrow, and other Scribner's classics in the museum. Even more so, once I learned that it was the contract for Treasure Island in 1911 that allowed Wyeth to buy and build the property where he would raise his lively family of 5 children, all but one of whom became an artist of one kind or another. Later, having coffee in a modern wing, looking out on the slow-moving Brandywine River, we debated how well known N. C. Wyeth is to a general American audience - probably not enough. Andrew, his son, is far better known - he was a very accomplished if less expansive artist - and Norman Rockwell is certainly better known for his folksy covers, but N. C. Wyeth is the gold standard.
Posted by Marilyn at 3:29 PM