I've always rued the fact that the USA modeled itself on Rome - blood, conquest, fraticide, wars, macho shows of power - instead of on, say, the Minoans who, from the evidence, were nature-loving, friendly, equal rights types (until we decode their language and find out some horrible truth). But Rome it is, and right now there's a big exhibit on the subject at the Constitution Center in Philadelphia. Like most of the exhibits I've seen there it's well researched, carefully presented, and under-attended. I was impressed by the offerings: books owned by Benjamin Franklin and John Adams, matching tortuous slave collars - one from the 1st century, one from the 18th, relics from Pompeii, including a huddled plaster body cast to give an all too human feel for the eruption of Mt. Vesuvius in 79 ce. I think the most intriguing classical reach was a silver tea service with a cream pitcher in the shape of an upside down Roman helmet. 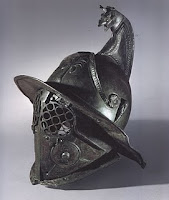 The foundation story of the USA is interesting - much more David and Goliath than Romulus and Remus (thank God) but we'd be a whole different country without Rome - just as Rome would be nowhere without Greece and the Etruscans. The 'founding fathers' were for the most part educated, patrician men who identified with the ruling classes in the Roman Republic - like them they were landowners in an agricultural society, strong-willed men who prized character and rights for 'all men' - a category that rings hollow from our perspective as it left out women and people without property, not to mention, of course, slaves. When the new little republic created its icons in the late 18th century it looked to Rome: Busts of George Washington and Benjamin Franklin draped in togas, their faces serious and full of dignity in the strong, wizened Republican Roman model,  our great American eagle  -
yes a native species, but Rome used an eagle for its standard too. 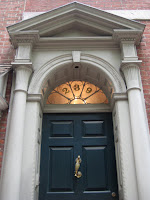 The easiest and most obvious place to see the influence on Rome on American life and iconography is in architecture. As I walked out of the (modern) Constitution Center and headed home through the historical center of the city I passed endless examples of neo-classicism - the Second National Bank modeled on the Parthenon via Rome, an obelisk and a gravestone with draped figure in bas-relief, pediments and columns on the doors of colonial-era townhouses, Corinthian columns on Old Pine Street church and my local bank. You don't have to live in the 18th century to see Rome in your life - your bank probably has those columns too. Just as they did for the 'new' Republic, those columns, pediments, and sober forms speak of character, virtue, freedom from tyranny, and trust.
Posted by Marilyn at 11:06 AM