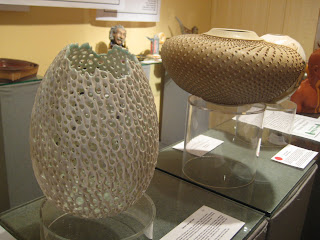 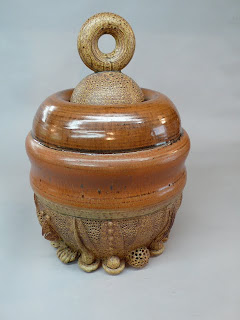 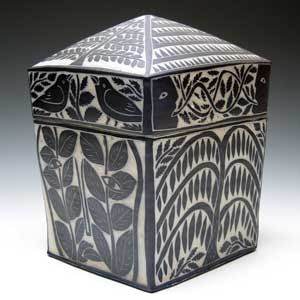 I'm especially intrigued by smaller galleries - what they're showing, of course, but also how they decide what to show and how they survive. Here in Philadelphia I'm surrounded by small, courageous, vital galleries. Old City, the next neighborhood over from mine, is the heartland of small art spaces with the newest and latest, but there are others scattered around, like seeds carried a little further by the wind. In the round of Ceramics exhibitions motivated by the recent NCECA Conference, several of these small galleries are hosting interesting exhibits. A new one to me was SubOcto on Alter Street, an artspace in a small artist-owned building with rental art studios, where, until April 25, the one-man show is a tribute to Val Cushing, the legendary ceramics master from Alfred University.  Broad tables of metal and wood built by Andrew Jevremovic, the sculptor-owner, showcase Cushing's work perfectly, allowing the simple, powerful pieces to communicate the functional nature of the work while also presiding as small-scale works of monumental sculpture. I was taken by the details of the work: neatly rolled handles, sharp unexpected angles, and surfaces with carefully monitored effects of glaze and firing. Cushing has an affection for a strange lavender glaze, a rare color in his kind of hearty ceramics, that worked better for me when it was matched with something darker and heavier than on its own. Another space with a small interesting show is the Show of Hands store on Pine Street. In an alcove gallery, until April 30, you can find a juried show of 30 nationally known ceramic artists. There is a wide range of techniques and choices on display. A tall, hand-built vessel featuring a neat double row of orange circles by Doris Fischer-Colbie stands near an intricate painted Japanese-flavored pillow by Darlene Davis, and not far from a light-hearted but technically difficult teapot in the form of a bagel and a box of Philadelphia (what else) Cream Cheese by Meryl Ruth. The artists, chosen by Sherman Hall, editor of Ceramics Monthly, were on hand for an opening reception.
I've written before about BSquare Gallery on 9th Street, one of my favorite small galleries. Here, until May 1, is a show entitled "1895 years of Pottery," which features master work from all over the country, including the fine sgraffito of Matt Metz from Alfred, and Neil Patterson, a local favorite with a studio on Fairmount Avenue in Philadelphia. I was happy to see that the show had almost sold out by the end of the first week.
Posted by Marilyn at 12:53 PM