Sunday in the Park with Drawings 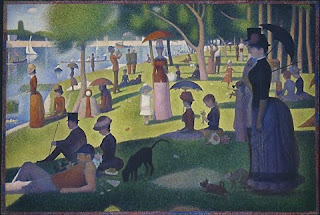 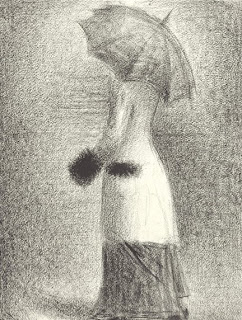 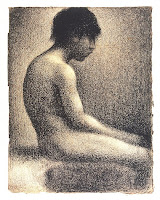 Theater and art have always been particularly close friends. Sets and costumes can be art history lessons with colors and images straight out of recognizable paintings or with overt references to a specific artist. Some theater is more blatant and more or less successful about it than others - the current Broadway hit 'Red,' about the work of Mark Rothko won big at the Tonys last night. In 1984, however, Stephen Sondheim set the bar for some time to come with his "Sunday in the Park with George" about the life and work of Georges Seurat. The Arden Theater Company in Philadelphia has a production on right now. I saw the original (in previews!) so have an almost proprietary attachment to Sunday in the Park with George and am a tough critic, but I came out very happy. It's a great show, with an excellent cast, especially Jeffrey Coon who plays George. He not only looks like Seurat, but is matched beautifully to the immense challenges of the words and music. His rendition of 'The Day Off' - the Dog Song - is worth the price of admission alone. There are all kinds of theater and musical pleasures here, but I want to mention the set, which makes a point of Seurat's drawings, as the route to the finished masterpiece painting. Seurat's drawings, done with crayon on textured paper in a close approximation of his pointillist painting technique, have a mysterious quality that makes them unique - they're as ethereal as they are strong and powerful. In the Arden production a huge frame dominates the stage as a backdrop for the action, and for much of the first act it's filled with (pretty good) versions of Seurat's sublime graphite drawings. A recent exhibit at the Museum of Modern Art showcased his drawings, many of them sketches for the figures that turn up in the painting - it was fun to see 'them' here, and see the character of George constantly making them as part of the action. In a talkback with the actors after the play Jeffrey Coon talked about how he'd taken a drawing class as part of his preparation for the show, and shared the sketches he'd done on stage that night by flipping through the sketchbook he carries. I think he should stick to acting, but it was great to see how fully he'd entered into the world of this short-lived, fascinating artist.
Posted by Marilyn at 11:28 AM