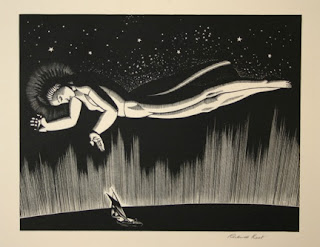 Rockwell Kent was both a perfect creature of his time and a complete original. His brawny broad shouldered Art Deco illustrations are firmly planted in early 20th America, when books and print served as potent messengers of cultural meaning, capable of the sharp sting of reproach as well as the fine pleasure of a literate, well-composed page. He is one of a number of American artists, including some of those I wrote about two posts ago, who give us a clear picture of a very particular time. But on the other hand, there is only one Rockwell Kent, the fearless adventurer who stalked the wild 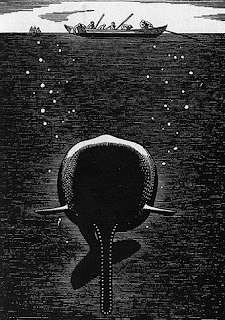 places of the earth in sturdy boots, a pen and notebook ever at hand. Perhaps best known for his stellar pen and ink illustrations for the celebrated Lakeside Press edition of Moby Dick (1930) Kent needed no paltry 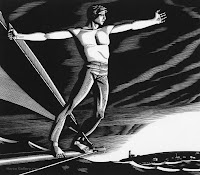 second-hand references for his churning waves, high seas, and angry nature - he'd been there. The list is long and impressive - Greenland (where he was shipwrecked and lived for some time) Tierra del Fuego, Alaska, Newfoundland, an island off the Maine coast - and the wilds of the Adirondack Mountains, his stateside home for many years. Kent walked another tightrope of sorts in his career and life, moving from 'society illustrations' for Vanity Fair (he signed them Hogarth Jr., a nod to William Hogarth, the sly 18th c. English artist and satirist) and sleek ads for a luxury boat

manufacturer, to high-toned book commissions, and finally to crisply critical social commentary that aligned with his deeply-held belief in the rights of the common man. 'Workers of the World Unite' and 'Wake Up America' both in a show at the Philadelphia Museum, are good examples of how he could temper his message 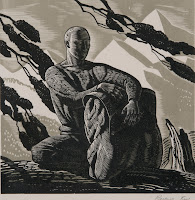 from urgent to subtle. He was a gifted writer too, who put his experiences and his philosophies into words as well as pictures - like his art, his books are a slightly dated but 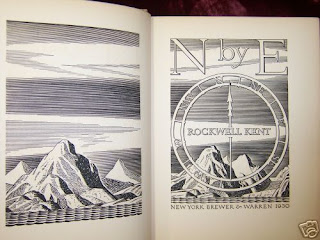 earnest, authentic record of a fascinating period of time from a singular perspective. A passage from his book Voyaging spells out his identity: "it the reality of mountains and plains, the sea and the unfathomable heavens, unchangingly forever dominating man, cradling him in that remote hour of his awakening into consciousness, forever smiling, brooding, thundering upon him, that have imposed their nature upon man and made him what he is." 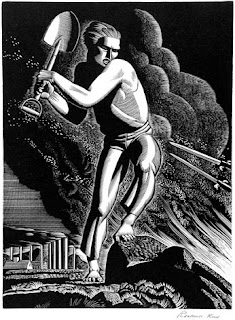 Along with many other creative intellectuals, Kent put time into the Communist Party in the hopes that it would provide a better answer, and inevitably his involvement led to clashes with Joe McCarthy and his committee. It also, however, led to remarkable honors and actions. Kent, the first American artist to show his work in the U.S.S.R., was awarded a Lenin Peace 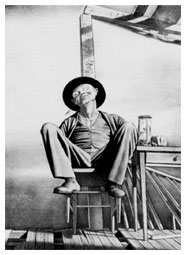 Prize; he donated the money to help women and children in both Vietnams during the Vietnam War years. Kent's brand of bold outspoken courage in art and life, put to the service of big ideas and a greater good, is a bit thin on the ground these days - it would be nice to see more of it in our moment. Rockwell Kent would have no trouble recognizing that help is needed right now for the poor, the needy and the hardworking common 'man.'

The Philadelphia Museum is currently showing Rockwell Kent - Voyager: An Artist’s Journey in Prints, Drawings, and Illustrated Books. Through July 29, 2012. The show is organized by Kent's longtime friend Carl Zigrosser, who was the founding curator of the museum's department of prints and drawings. The show includes a range of work, including woodcuts, pen and ink drawings, pencil sketches, lithography (a self-portrait with the stone that made the print is fascinating) and watercolors.
http://www.philamuseum.org/exhibitions/760.html