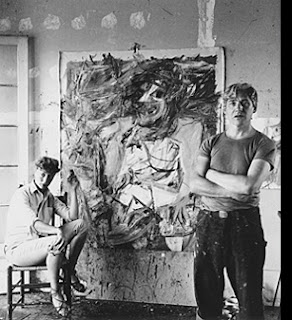 He was a handsome guy, no doubt about it. Even with the 27 cents or whatever it was he had in his pocket when he arrived in New York in 1926, he was going to do something and be somebody - you can see it in the pictures. He paid the requisite art dues for about10 years, working as a sign painter and for the WPA, but by 1935 he was pretty much launched on his career. I doubt, though, if even he knew how important a career that would be. The big 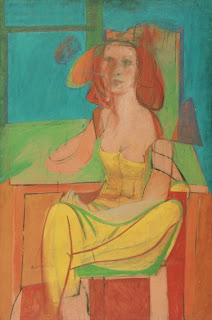 retrospective of his work at MOMA - astonishingly, the first major retrospective for him EVER - has been knocking everybody's socks off since it opened on September 18. I certainly concur. It's a fabulous, comprehensive, exhaustive, show, with plenty of 'I never saw that' and 'I didn't know he did that' moments. The first of these comes right at the beginning, with the uncannily accomplished still life he painted when he was a teenage apprentice in his native Rotterdam - it's a 'life's not fair' moment, in a category with the portrait Picasso did at a similar age and young Leonardo da Vinci's angel, so beautifully painted that ever after his master Verrochio (allegedly) devoted himself exclusively to sculpture. The de Kooning of the iconic Woman series is present almost immediately by the fierce sense of energy that pervades his work in all mediums, though he worked his way through several influences and experiments with style. I found the first true 'de Kooning' 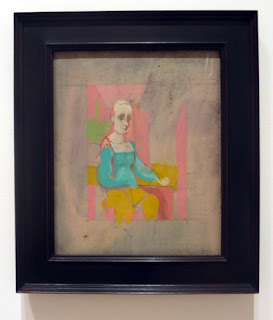 appearing around 1939 with 'Figure,' a small framed study that looks backward to the elegance and form of Renaissance portraits while also sounding a loud call to the colorful, fractured expression of mid-20th century America art. Arshile Gorky was clearly important for de Kooning; they were exact contemporaries and shared a studio for a while, probably finding comfort in their common status as uprooted Europeans as well as support for their brave adventures in modern art. I saw a lot of Gorky in de Kooning, even in later paintings, no doubt helped along by the recent Gorky exhibition at the Pennsylvania Museum of Art. Both of them had a way with color that was distinctive, aggressively appealing, even jarring, with a kind of exaggerated sweet palette of pinks, greens, and blues. Cezanne's mastery of color came to mind too; de Kooning had as sure a touch with his particular combinations as 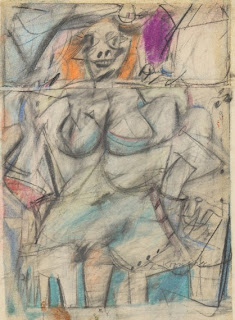 Cezanne had with his, though de Kooning's are atonal, minor chords compared to Cezanne's deep resonant harmonies. Having said that, I loved his black and white drawings from the 1940's where line and form, splashed and swirled with the same dashing, confident energy, took precedence over color. Gallery after gallery is full of exciting, pulsing shapes and 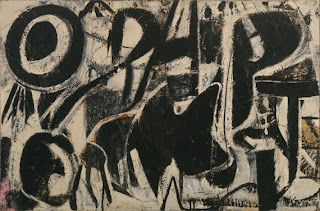 movement; it's like he had a big stew of shapes and ideas constantly on the boil, and he kept stirring it up and pulling out new ways to use the ingredients. The bulbous, throbbing shapes of recognizable limbs and bodies morph into abstract shapes in the drawings, then into more figures, and into his iconic women with their sharp little grinning mouths. One wall is hung with 5 of the Women series, a wonderful intellectual and aesthetic gauntlet. So much has been written about these blowsy, 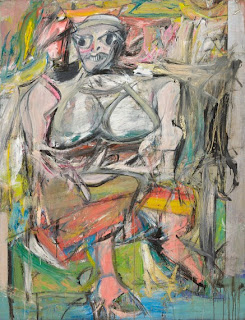 powerful females, much of it stuck on descriptions involving 'angry' or 'frightening.' In my opinion they're rich, somewhat comical, strong, assertive,

and assured - they may be aggressive, but why shouldn't they be? De Kooning was looking squarely forward by that time - it's not the old days anymore. At least that's what I like to think, despite knowing that he wasn't always so nice to his flesh and blood wife and fellow painter, Elaine de Kooning. Her portrait in the show is a counterpoint to the Women series on several levels. Calm, subdued, done with virtuoso drawing skill and carefully focused on every detail of her face, it could be an 18th century portrait by Jean-Dominique Ingres. 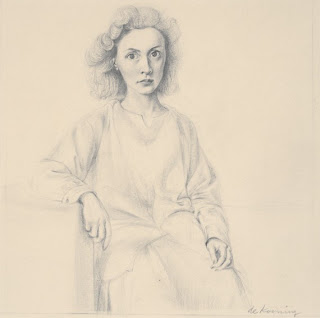 The exhibit continues through the last phases of de Kooning's life and career, encompassing a period of pure abstraction and on, into the years when he suffered from Alzheimer's before his death in 1997. Somewhere in the 70's, although the energy and pure panache with paint and surface never flagged, as evidenced by a gallery full of bravura abstractions, the center started to disappear. In the last 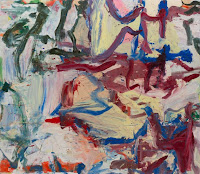 years it finally slipped away completely, leaving only the untethered ribbons of those sad late paintings. De Kooning is the acknowledged start to 'Abstract Expressionism,' the movement that dominated art during the middle years of the 20th century and changed everything that came after - the MOMA retrospective is the celebration of one of the greatest contributors to the story of Modern Art.
Exhibition images courtesy of www.moma.org