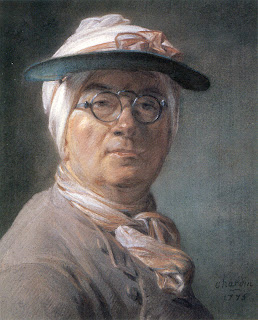 Cats, like children, are hard to include in serious art - too cute. For a change from the modern art of the last two posts, here's some 'serious' historical art that happens to include cats, by one of my favorites.  I like cats - I have two - and I'm very fond of the artist Jean-Baptiste Simeon Chardin (shown here in a self portrait from 1775.) Born in Paris in 1699, Chardin grew up and spent his life within the city walls without much need or thought for travel beyond. Once he caught the attention of King Louis XV he was granted a studio in the Louvre and lived there until his death in 1779. (At the time the Louvre was an abandoned royal residence being used for artisan workshops and meeting places for the artistic and scientific 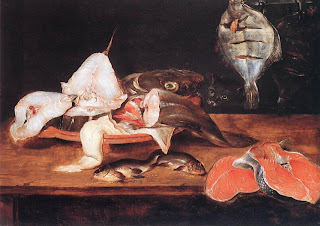 academies founded by Louis XIV - Chardin went regularly to meetings of the arts academy after he became a member.) Chardin was a true local artist, mostly self-taught but smart and observant - and a quiet revolutionary.  In contrast to the grandiose Rococo art that is the signature of the period, Chardin took his cue from the deceptively simple Dutch still life tradition. The golden age of Dutch Baroque painting was drawing to an end, but  masterful examples of composition, virtuosic effects of light and texture, and the rich possibilities of a simple story told with style and close attention to detail would have been easy for Chardin to find. 'Deceptively simple' is a good phrase to keep in mind for Dutch still lifes as well as for the work of Chardin - there is far more than meets the eye. Many Dutch still lifes feature grandiose settings of lavish expensive foods and exquisite vessels of glass, silver, and brass - they do double duty in celebrating the enormous prosperity of Holland 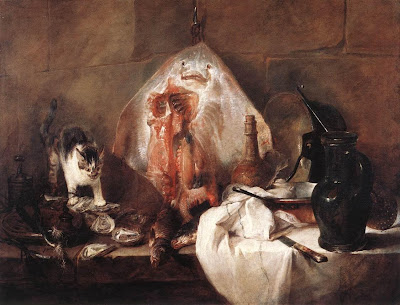 during the 17th century, while also paying homage to the simple pleasures of life, free of tyranny by church or king (many contain intricately coded messages, but that's a complicated subject for another post.) The example by Alexander Adriaenssen (at the top), who died shortly before Chardin was born, is somewhat atypical of Dutch still life, but it is a close match for Chardin. The concentration of raw foods anticipate the feast to come, inviting us behind the scenes to identify with the simpler folk who will do the work of preparation - and shoo away the cat lurking around that tempting pile of fresh fish. Chardin's revolution was this peek behind French aristocratic grandiosity, gently (and probably unconsciously - he was no outright rebel) guiding thoughts to a 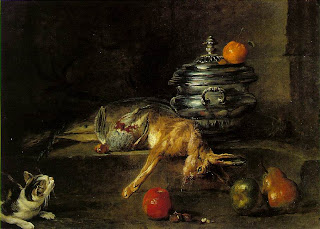 democratic future that would soon slap France hard across its rouged and powdered face. 'The Ray' from 1728 was one of several early paintings that gained him admission to the Academy. I've always found it to be one of his most interesting stories in paint. There are messages here of life and death, cruelty and comfort. Note the cat (really a kitten) - cute at first glance but with the demonic leer of a killer intent on prey, and in contrast the strange 'face' of the eviscerated ray that evokes a sad commedia del arte clown. The knife - an instrument of death - and the pitcher - a container for water, the stuff of life - hover just at the edge of the table, a precarious position that may be there to remind of us the precariousness of 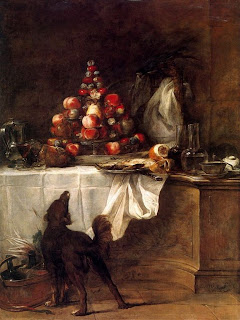 existence. 'The Silver Tureen' also by Chardin, also from 1728, also with a cat, seems a meditation on life, with the cat sitting quietly staring into the blank eyes of his fellow creatures , seeming to question the whimsy of fate. And for dog lovers, 'The Buffet.' There are messages here too, but as far as I can tell the dog is just a dog - always hungry and cheerfully optimistic about that pile of food toppling his way.
Posted by Marilyn at 10:34 AM