Painting the Town with Oldenburg, Furness, and PAFA 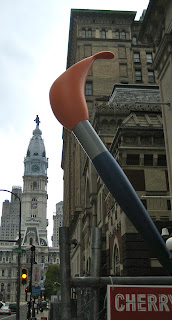 Philadelphia, already rich in public art, has a new guy in town. Claes Oldenburg was here Saturday, installing his giant, goofy 'Paint Torch' at the Pennsylvania Academy of Fine Arts. Goofy, for Oldenburg, is a term of endearment. His witty, double-take inducing sculptures stop even the Philistines in their tracks - a giant flashlight amid the neon of Las Vegas, 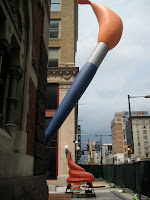 a fountain of flying orange peels in Miami, huge, helter-skelter bowling pins in the Netherlands, an ice cream cone teetering over a shopping street in Cologne, Germany. And many more. Claes Oldenburg studied in Chicago then made his name as a Pop Artist in New York in the 60's, with works like 'Soft Toilet' (1966) now in the Whitney Museum of Art, where I once read a note from him saying something about wanting people to see the objects for their forms and shapes, not for their function - that in time the function 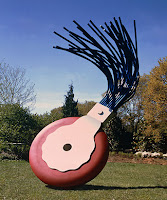 might disappear, but the object would still be beautiful. The idea is already well along, as with his wonderful 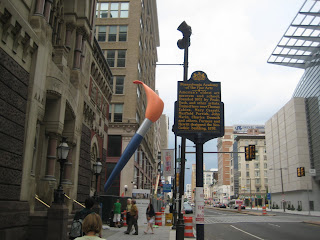 Art Museum, 'Split Button' (1981) on the Penn Campus, and the iconic 'Clothespin' (1976) on Market Street by City Hall. 'Paint Torch', 51 feet high, with a blue handle and a full brush or orange paint in mid-swirl, 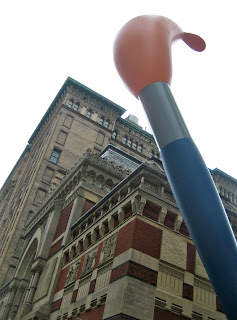 includes a six-foot glop of a drip for the pavement. Oldenburg sat watching the installation Saturday from a bench, directing it to the exact angle he wanted, the one he thought looked most welcoming. It does have an arc, as you can see by the pictures, that appears to wave you into the plaza of the Pennsylvania Academy of Arts - and over from  the huge spanking new convention center across the 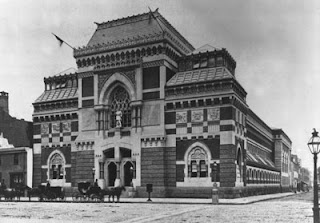 street. Part of the wit of the work, as with most of Oldenburg's public art, is the context, in this case the also witty, arty, extraordinary Victorian extravaganza that houses the oldest art museum and school in the US. (founded in 1805 by painter Charles Wilson Peale and sculptor William Rush.) The building, which was dedicated in 1876, is a masterpiece by the great Frank Furness who designed more than 600 buildings, too many of which have been destroyed (and was also a Civil War hero) though there are other splendid examples in and around Philadelphia. He was a major influence on later architects of note, including Louis Sullivan and Frank Lloyd Wright. So a great deal of brush-swishing has gone on 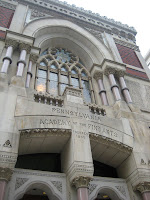 in that building - Oldenburg's 'Paint Torch' is a very contemporary tribute to past glories and to the future brilliance being honed in the PAFA school. One of the most famous names associated with PAFA is that of Thomas Eakins, the great American Realist painter, who began his career as an inspiring and iconoclastic teacher in the Furness building the year it opened. On a sadder note, 'Paint Torch' is

Oldenburg's first work installed after the 2009 death of his beloved wife and working partner, Coosje van Bruggen, who was essential to his life and work from the 1970's on.
See a slide show of 'Paint Torch' being installed (New York Times)
http://www.nytimes.com/slideshow/2011/08/23/arts/design/Arts-Brielfy--Oldenburg.html
The website of Claes Oldenburg and Coosje van Bruggen with a full list of work and installations
http://www.oldenburgvanbruggen.com/
Posted by Marilyn at 12:45 PM

Can't WAIT to see it in person. Thanks, as always, for insight and excitement.