Creativity - Set in Stone at Opus 40 (and finding yours) 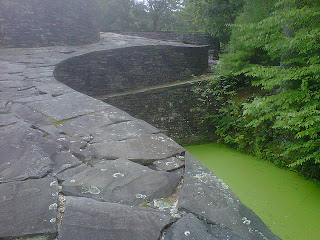 Who can pinpoint where creativity begins or say where it will take the person who allows it into their life? I don't agree with the cliche that 'everyone is an artist' - the talent, perseverance, etc., etc., 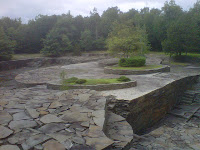 required to earn that title by a serious committed life in art is not so easy to come by - but every person does contain the capacity to be creative. I would even say that every person has the potential to make, build, or institute something of lasting creative significance for themselves and others. (See note at the end about an opportunity to develop your creativity through a wonderful program.) All this came to mind when I was once again up in the Hudson Valley for great music (see last week's post - this 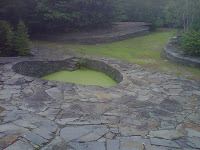 time it was the SummerScape Festival at Bard College) - and once again, happily, had an unexpected, fascinating encounter. 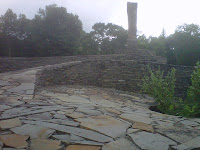 Playing hooky one morning from Sibelius, my husband and I followed a back road in the town of Saugerties, lured deep into the woods by a chance notice. At the end of that road we discovered Opus 40, an astonishing site that was added to the Registry of Historic Places in 2001. We pulled into the parking lot and found, first, a ramshackle barn containing a museum of tools, then a split log family house, and finally, to our amazement, a construction that took my breath away as the 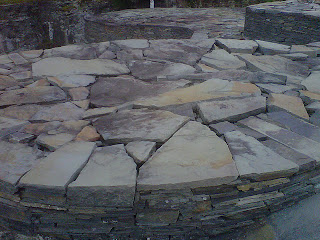 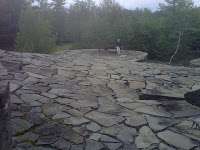 view opened up and I realized the scope of it. Against a backdrop of Catskill mountains and cloudy sky, I witnessed a creative obsession winding, climbing, and twisting across the remains of an old bluestone quarry, built entirely of that blue-grey material like some ancient Pre-Columbian city. The man behind Opus 40 was Harvey Fite (1903-1976), a sculptor and professor at Bard College, who had 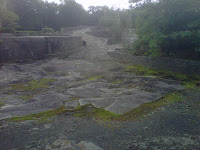 started out to be a lawyer, tried the seminary, had a short acting career, and then discovered his true passion for making - making things - three-dimensional, hard, 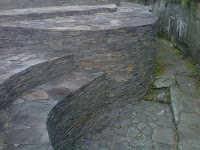 material, things. Opus 40 isn't just a work of art, an installation - it was and is Harvey Fite's life. He wasn't part of any movement or group, though he's now considered a pioneer of the Environmental Movement of the 70's, and the most important show of his work was almost certainly the posthumous tribute in 1977 at the Hirshhorn Museum. If Andy Goldsworthy wasn't inspired by him, he should have been. Part of Fite's inspiration came from his encounter with, in fact, the Pre-Columbian Mayans, after he helped with restoration work in Honduras. When he came home he used the same, mortar free techniques in 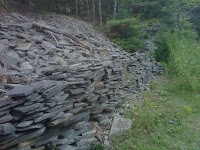 building Opus 40. Near the entrance it mounts to a high viewpoint crowned by a standing stone - the 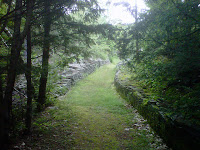 Monolith -  then broad sloping paths lead you away, past deep crevices, around smooth, tailored walls, as neat and tidy as cross-stitch work, past the crumbling heart of the old quarry, onto grass paths that take you further into the woods, to more walls, more stone, more paths. The ground turns a bit muddy, signifying the presence of water, and as you circle back you find pools, bright green with algae, fitted snugly into curving walls, and another of clear water with the rusted remains of a well-worn diving 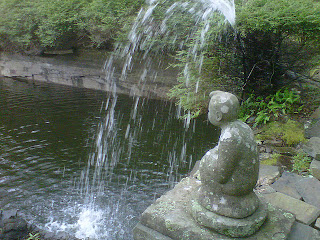 board signifying a reward at the end of what must have been many long hot hard-working days. At one moment it all seems organic, as if this complex puzzle of stone, land, and water had just willed itself into being, but the next moment one stands in awe of one man's patience for detail in the service of his broad vision. http://www.opus40.org/fite.htm
It's not likely that your search for creativity will lead you to build an Opus 40, but if you would like to free yourself to develop your creative side, strengthen your confidence in your artistic capacity, and get more pleasure out of the right side of your brain, think about signing up for the program: The Artist's Way (based on the ground-breaking book by Julia Cameron) with Stephanie Costello, an excellent clinical social worker in Philadelphia who has had phenomenal success helping people find their own rich sources for creative and artistic satisfaction. The next program begins September 14 (both evening and daytime sessions) - you can see details on Stephanie's website http://www.stephaniecostello.com/for_groups.html#artists Stephanie is warm, compassionate, and passionate about helping people to be happier and more creative - this is a great opportunity! (Note: I've never personally been a fan of the Julia Cameron approach - what prompted me to endorse this program was hearing Stephanie explain how she uses it, and how people have responded over the years she's been doing it. )
Thanks to Rick Fitzgerald for the pictures!
Posted by Marilyn at 10:24 AM

I have to "second" everything Marilyn just said. Opus 40 is like nothing I've ever seen before. It is touching, overwhelming, and inspiring. I wish the entire thing could be airlifted to some more public venue like Storm King and given its own 10 acres for all the world to see. I could have spent the entire day there: dreaming, wandering, taking it all in, over and over again, from all the different angles.