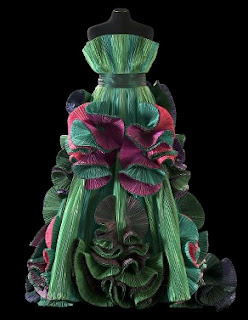 'Spectacular, stunning, dazzling, amazing - where do you begin with the work of Roberto Capucci, the Italian designer whose work is currently on view at the Philadelphia Museum of Art? The exhibit, Art into Fashion, showcases a magician of fabric and color with a long career that includes some film work (Theorem by Piero Pasolini 1968) and many extravagant showings in various European locales. He is not a work-a-day kind of fashion designer - his statements about distancing himself from the commercial and institutional demands of the fashion trade make that clear, but even if he hadn't said a word, the work on displays testifies clearly that this is not Art INTO Fashion, but ART on its own terms. Many of the designs - most are more or less formal 'party dresses' - are given the 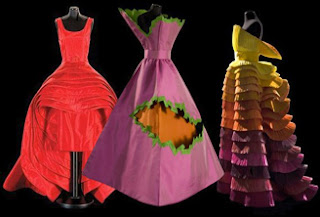 name 'Sculpture Dress' - emphasizing that the point is not how the dress would look on a woman's body, but how it looks by itself. In fact, in an accompanying video, the clothes in action looked somewhat awkward; folded and pleated appendages that were spectacular as details on the stationary work, bumped and jerked against the model as she walked.  But who cares? No one can afford these anyway, so they are fun to appreciate as sculpture in the round. Color bowls you over the minute you walk in - Capucci has a rich drenched palette of glorious jewel tones - green, pink, magenta, clear red, blue, turquoise that he mate with gleaming taffetas and sensuous satins - against black backgrounds and under dramatic lighting, the exhibit makes for a delicious experience. He also 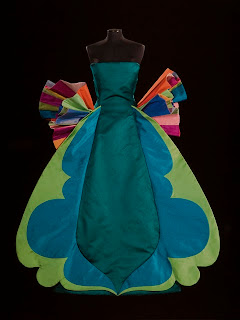 ruffles, patches, pleats, folds - the possibilities keep opening up as you watch. There is an underlying debt to nature throughout, paid out in the use of materials - a dress covered with polished pebbles, another belted with bamboo - as well as themes and ideas. A dress titled 'Bougainvillea' is a paean to the namesake vine - the multicolored ruffles twine up the core garment, as if growing before your eyes.
Sculpture is not always this chic - this exhibit is fun and interesting on several levels.
Art Into Fashion is at the Philadelphia Museum of Art until June 5, 2011.
Posted by Marilyn at 9:44 AM