The News from China 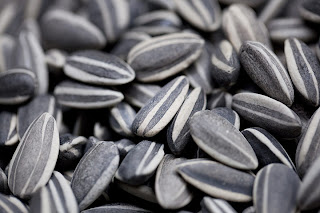 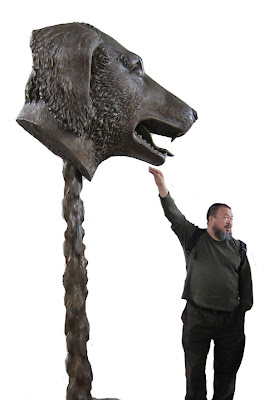 Art is still very powerful. If you ever doubted it, you just have to read today's news. The focus is on China, and 'power' is defined by extremes. One the one hand, the art market is buzzing at the $10.1 million dollar price of a painting by a living Chinese artist, Zhang Xiaogang. One the other is a very different show of power - the disturbing news of the disappearance of Ai Weiwei, arguably China's most important artist - in fact, arguably one of the world's most important artists at this moment. Ai Weiwei designed the 'Birds Nest' Olympics stadium (a project he has since disowned) but that is hardly the cause of the actions taken against him. Chinese authorities have harassed him for years because of his often elegant, sometimes subtle, but always outspoken protests again human indignities and injustices, and this week the stakes went way up when he was detained and his Beijing studio raided. It is interesting to try to understand why Zhang Xiaogang appears to have escaped disfavor, despite what seem to be critical elements in his work, while Ai Weiwei is marked for harsh treatment. Both have shown widely in the West and have a great deal of international stature. Zhang Xiaogang's series ' 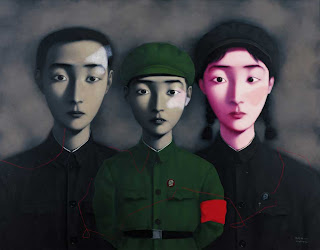 Bloodlines,' based on old family photos, presents a view of China trapped in a motionless reality of obedience - mother, father, child, all neat, somber, and nearly interchangeable. The expensive triptych, 'Forever Lasting Love,' is a surreal, Bosch-like landscape of global cultural, sexual, religious(ish) symbols - a fat American-looking turkey, Hindu-seeming ascetics in a sort of Nativity scene, a vagina-like flowering tree sprouting heads, etc. It may be hard to understand exactly, but it has a human and artistic logic, with recognizable bodies, faces, trees. Ai Weiwei, by contrast, may be more of a threat because his work is more slippery - at first glance it means little beyond the obvious, but as you think about it.... Art that cause one to think makes certain regimes very uncomfortable. For example, Ai Weiwei had a recent installation at the Tate Modern - I saw it when I was in London in December. A room of sunflower seeds, each one made of porcelain and hand-painted by an anonymous Chinese worker, formed a gray sea of tiny elements, each one exactly alike, none of them standing out in any way. A more overtly critical work was his response to the loss of so many children in the 2009 earthquake as a result of poorly constructed schools, when he used childrens backpacks to spell out the pained cry of a grieving parent. Other strikes against him seem to be that he is openly critical of Chinese policies on Twitter - he has 75,000 followers, and he is comfortable in the West (he lived for an extended period in New York.) A large public art project by Ai Weiwei, based on the animals of the Chinese Zodiac, will be installed in New York soon and will be on display at 59th and 5th Avenue from May 2 - July 15. Let's all hope he is there for it.
Posted by Marilyn at 3:27 PM

Fascinating to hear about Ai Weiwei. Why did he disown credit for the birds nest? What a scary world.

Very interesting and instructive commentary. It strikes me that so many of these star artists coming out of China (including Ai Weiwei) are the children of relative privilege. I give many of them credit for making productive and (in the case of Ai Weiwei) courageous use of that (sometimes) secure position.