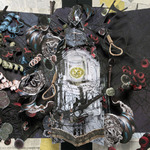 Have you ever walked into an art exhibit and thought, I'd like to do something like that? You look closely at the technique and think about the fun it would be to try it at home. I often do that, even in museums - I learn a lot by looking. But the pop-up extravaganzas of Colette Fu are something else. When I saw the fascinating exhibit, Haunted Philadelphia, at the Athenaeum, I could only stand in awe, marveling open-mouthed, at her work. It's a wonderful idea - taking some of the familiar landmarks of Philadelphia, cutting them up, giving them a scary, demented twist, and and reassembling them into large-scale books that pop them out in brilliantly engineered 3D. Fu researched darker episodes in the city's history and worked them into her 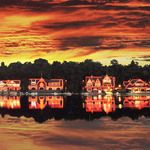 creations. Her treatment of City Hall includes a swinging noose, recalling the gallows that preceded the 19th century masterpiece (the largest masonry building in the world), and the deconstructed lights of 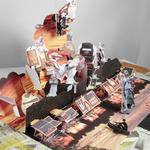 Boathouse Row are meant to call up memories of Native American beliefs in strange spirits along the Schuylkill River. A natural, of course, is Eastern State Penitentiary, 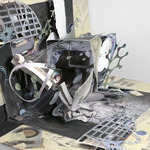 now a popular tourist site, but once a dark place of abuse and mistreatment. Pop-up books have been a staple of children's literature, especially in the last 15 years, but the craft goes  a long time. 14th century scholars used paper flaps in books of anatomy, and the 19th century saw a great surge in books that entertained with paper flaps, pop-ups, and folds. But paper engineering on this level is always a wonder: Fu gives workshops if you want to try your hand. http://www.colettefu.com/workshops/  Haunted Philadelphia will be at the Athenaeum, 219 S. 6th Street, Center City Philadelphia, until March 18th, 2011, and the gallery will be open for First Friday, March 4th. http://www.philaathenaeum.org/
Posted by Marilyn at 12:26 PM

Thanx Marilyn for writing about this - I will definitely be checking out this exhibit- it is right up my alley!

Agreed! Can't wait to see this! Thanks for bringing it to our attention.

I went on Wednesday to see the exhibit- it was INCREDIBLE! Thank you SO much for writing about this exhibit and bringing it to my attention. I think everyone should visit the Anthenaeum building. The architecture and design is stunning. Both are wonderful! Thank you again.

Kate - I'm so glad you got there. The exhibit is amazing but so is the entire Athenaeum package - the building, the history, the library! Come for some of the lectures - you can find the schedule on their website. btw - I saw your website - you do such colorful interesting work!