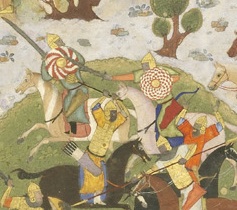 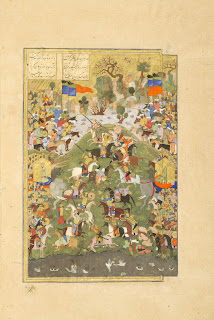 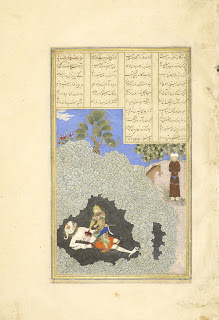 The Shahnama, the ancient Persian epic crammed with brave, handsome kings, evil demons, fabulous deeds and mythic battles, is one of the most famous stories in the world. Written over a 30 year period (around 1000 ce) by the poet Firdawsi, the Shahnama tells a long history, a mix of fact and magic. Rustam, the greatest hero of the epic, is a King Arthur/Alexander the Great type being who probably lived, but who exists as a force beyond the real, forever doing miraculous deeds with superhuman abilities. For long centuries of Persian kingship, each ruler commissioned his own copy, a way of marking his divine right to hold the throne. This means, therefore, that there are many Shahnamas: the same story but different versions, all elaborate, painstakingly created books with exquisite illustrations. When the patron is a king, no expense is spared, so the Shahnamas of the Persian rulers are rich and magnificent things to see. And if you want to see one, now is a good time. At the moment there is a splendid Shahnama exhibit in New York, another in Washington, and another in Dublin. The Washington exhibit (at the Sackler Gallery until April 17) and the one in Dublin (at the Chester Beatty Library until April 3) appear to be general in nature, with a selection of illustrations covering a broad span of centuries - note the websites at the end of this post.  In New York, however, the exhibit (at the Asia Society until May 1), features one particular Shahnama, a 15th-century volume commissioned by Timurid prince Muhammad Juki, who reigned from 1402-1444. It is the first time that this work, recently unbound and conserved, has been exhibited as a whole in the U.S. It is hard to know where to start with these illustrations - other than with the magnifying glass provided at the entry. Each small page is a dazzling universe of color, pattern, infinite skill and design, and each one stopped me in my tracks. And then I moved on to the next and got chills all over again. So, a few favorite pages: Rustam Slays the White Demon - The King is blind, the only cure the blood from a terrifying demon; Rustam takes it the daunting task, and here he is, squatting 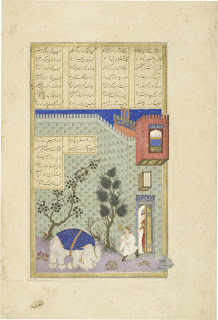 next to the ugly dead creature, isolated by his personal courage in a dark space surrounded by a cloud of minutely detailed foliage. He draws out the rich red blood with his bare hands while a servant waits quietly and Rustam's horse peeks out to watch. At the top the story is told in graceful Arabic calligraphy as elegant and perfectly formed as the illustration.  On another page Rustam, still a child, has taken his grandfather's royal mace and is about to slay a mad Elephant that has been 'wreaking havoc' - he has slipped out of the castle, whose neatly patterned walls rise high up above his head, past a vigilant guard. According to the accompanying text, the guard who tries to stop him will be beheaded as well. Here is an allegory of benign brutality in which sacrifices are made to serve the greater good. One of the last pages on display, thought perhaps to date from a later time than the rest, is a dense battle scene rich with soft jewel-like colors and intricate patterns, that jumps and moves before your eyes. Tiny men and horses scramble at each other amid a crowded scene that includes a dignitary seated on an elephant. Some of the soldiers carry shields painted oh so carefully with dizzying geometric patterns, probably historically correct as they would have distracted and confused the opponent. The horses in these pages are one of the greatest delights. All of them, whether in the thick of a battle, covered in rich trappings of war or ceremony, or merely standing by, show their breeding in the elegant curves of their necks, their delicate heads and their gentle, alert eyes. The Shahnama will always be around, but if you can see these marvelous works of art in person, you will be the richer for it.