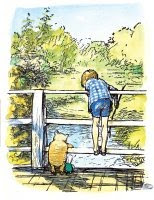 I taught a class in the History of Children's Literature this afternoon and, after 3 hours of John Locke and his mighty influence, have Winnie the Pooh on the brain. Winnie the Pooh, by A. A. Milne, was first published in 1926, long after John Locke 'invented' the idea of delight as a good way to get children to learn what they needed to know, but it is a very Lockean book, full of objects and experiences and reflections on the important things in life. As you surely know, Christopher (after Columbus) Robin (after Crusoe) goes exploring in the "Hundred Acre Wood" with the help of his trusty band - Winnie the Pooh, Piglet, Tigger, Roo, and several other creatures, all charming in his or her own way. Don't let the plasticized, commercialized, trivialized Disney gloss stand in the way of getting to know the real thing, if you don't already. E. H. Shepherd's illustrations are full of spirit, sketchy but firmly drawn; they fit Milne's text to perfection, as if they sprang forth together fully formed. Here are some samples, along with a few quotes from one of children's literature's most endearing masterpieces. 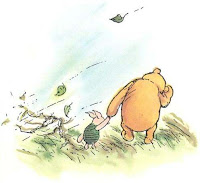 "Well," said Pooh, "what I like best -- " and then he had to stop and think. Because although Eating Honey was a very good thing to do, there was a moment just before you began to eat it which was better than when you were, but he didn't know what it was called.

Promise me you'll never forget me because if I thought you would I'd never leave.

Just because an animal is large, it doesn't mean he doesn't want kindness; however big Tigger seems to be, remember that he wants as much kindness as Roo.

You can't stay in your corner of the Forest waiting for others to come to you. You have to go to them sometimes.
Posted by Marilyn at 11:14 PM