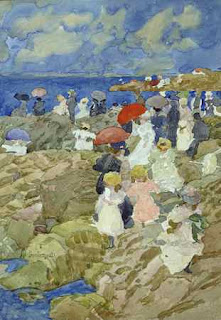 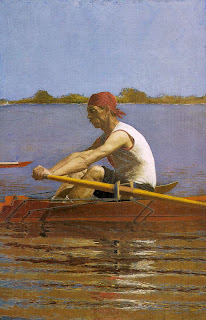 It's hard to think in this heat, but my thoughts are of art that can provide a little cool. American art, specifically, rather than beach scenes by Monet or breezy views of the Mediterranean by Matisse. Same time period, different landscapes. A 'local' favorite is Maurice Prendergast, a sort of American Post-Impressionist, who was also a member of The Eight, a group based in New York. Maurice, with his brother Charles, a lesser artist, lived in Boston, and many of his paintings are of late 19th century bathers in blousy beachwear, grouped on New England beaches under colorful parasols. There's a lovely spottiness to his work, especially his watercolors, that pleases by a sense of effortless design, as well as the atmosphere of bright sun and cool shade. Or how about Winslow Homer's gorgeous 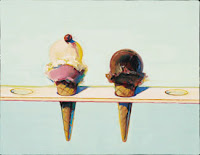 watercolors of blue Caribbean waters, with soft sandy beaches and breezes that blow, warm and gentle, right out of the frame into your over-heated face? If you'd rather cool off by comparison, there's Edward Hopper's painting of a young woman in the heat of an East Coast summer. No air-conditioning in her upper floor apartment, her body and her bed stripped down to almost nothing, she sits facing stoically into bright New York City sunshine. If you've ever been there in mid-summer, you don't have to guess at the humidity. And then, Thomas Eakins's terse portrait of a rower on the Schuylkill here in Philadelphia - at last there's water, but the damp red handkerchief and the grimace on his face speak not only of exertion but a relentless heat that, right now, right here, is dragging everybody down. And finally, not to leave out the West Coast and a lighter, later aesthetic, Wayne Thiebaud's Ice Cream cones - no heat wave would be complete without them.
Posted by Marilyn at 10:51 AM