Snow is the story 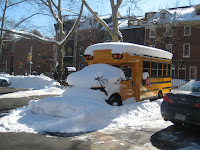 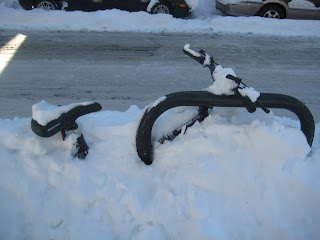 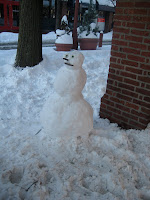 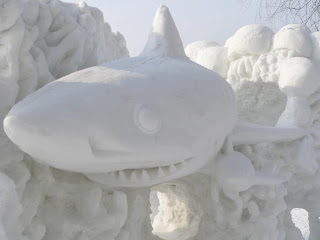 If they're looking for the snow that's missing from the Winter Olympics, they should look here in Philadelphia. Two record setting snow falls since early December, and another big one coming tonight. Mother Nature, the sculptor, clearly has something in mind, some big project. Along with sand, snow is her great sculpting medium. For the most part Mother Nature creates with an abstract, incidental kind of aesthetic, often very beautiful.
I see examples of it all over the place - and she likes including found objects, like the bicycle and the school bus. But sometimes humans get involved;  for some reason the Chinese seem to be the most enthusiastic. I found these amazing pictures from the Harbin Winter Festival, which is held every January for a month - in 2008 in this far northern corner of the world they created the world's biggest snow sculpture. A snowman is no doubt one of the first artworks any child
(in a cold climate) makes. It seems like something
a contemporary artist would pick up on - wouldn't it be fun to see one standing in the corner of a museum, tilting a little to the side as it appears to begin to melt? Jeff Koons, are you listening?
Posted by Marilyn at 5:17 PM

and up here in Vermont, we've missed just about all the storms, we're hoping we'll get some tomorrow!