You have to love a city that celebrates art in a tangible public way - even more so when it has a sense of humor about it. Philadelphia,with its lavish scattering of public sculpture and murals, is a great example of a city that celebrates art, but New York has it beat in the sense of humor department. When I was there yesterday, muscling my way through the underground labyrinth that is the NYC Subway system, some pretty nice art snuck up on me and brought color and fun into a grim march towards a destination. I guess that's the idea, isn't it? 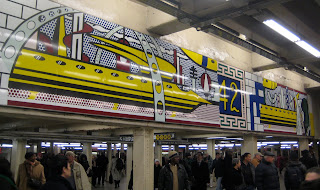 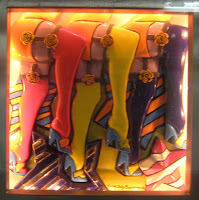 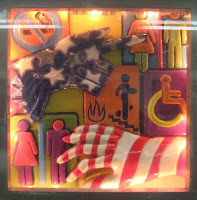 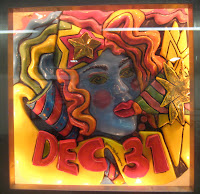 My personal 'Look at That!' moment was in the 42nd Street station as I transferred between the #1 downtown local and the R train to Queens, but art - good, original, sometimes big name art - is ubiquitous in the Subway. I've seen interesting work in various stations, but yesterday the ceramic murals of Tony Buonagurio really caught my eye. Go to the NYC Subway website to find links to the art and artist for every station - if you scroll through you'll find that the art is clearly for ALL subway riders and residents (in New York, virtually the same thing.) Everybody gets to benefit from this lively program - you can find examples all up and down the system, even way out in Brooklyn and Queens, in residential neighborhoods where tourists never have reason to go. Tony Buonagurio's murals are small montages of images relating to the 'business' of the area - Broadway, dancing, nightlife - and brightly glazed in crayon colors (each panel 'framed' under thick protective plexiglass) to catch the impatient eye of a commuter.The 42nd Street station also has an overhead mural by Roy Lichtenstein - the bright dots and jazzy lines are a good match for the smaller pieces. Of course the art is part of a lively scene - picture it with the sound track of a good subway combo blasting away between the uptown and downtown stairways, the huddle of NY cops standing around tapping their feet and listening - I mean, of course, keeping order - and the woman from the crowd who jumped in for an impromptu dance. It would be nice to think it was all part of a tribute to Bob Noorda, the designer of the graphics for the NY Subway system - he died this week, but back in the 6o's he gave the system its distinctive modernist aesthetic. I hope he'd be pleased to see the ongoing underground developments in art.
Posted by Marilyn at 3:17 PM