Grit and Revolution: The Ashcan School 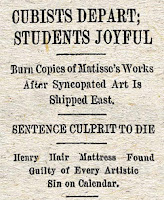 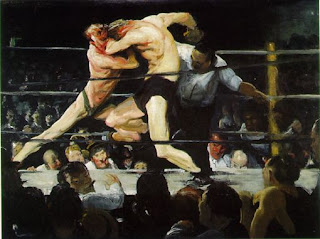 Isn't it funny how so many art movements are named by snarky insults? The 'Impressionists', The 'Fauves', even the Gothic style - these were not terms of endearment but put-downs from critics who clearly thought they knew what was 'art' and what was not. 'The Ashcan School' is another example, this time from early 20th century America. In the context of a time when so much artistic fur was flying in Europe 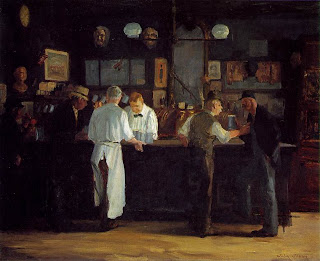 (Cubism, Surrealism, Picasso, Matisse, etc.) the work of the Ashcan School can seem a bit tame and stodgy, but these artists were also revolutionaries, rebelling against conservative American tastes - which were at least, if not more, conservative than traditional tastes in Europe. In 1913 the famous Armory Show was mounted in New York, bringing the first taste of avant-garde art to the U.S. The Armory Show, an earthquake that shook expectations and assumptions to their foundations, was recognized as a colossal event but one that was shocking, even dangerous. The New York Tribune called it “A Remarkable Affair Despite Some Freakish Absurdities.” It is said that notices were posted warning pregnant women away for fear they would miscarry, and when the show moved to Chicago, Matisse was given a mock trial on charges of 'artistic murder, pictorial arson, artistic rapine, total degeneracy of color, criminal misuse of line,' found guilty, and sentenced to die. Organized by American painters eager to bring the excitement of Modern Art closer to home, the 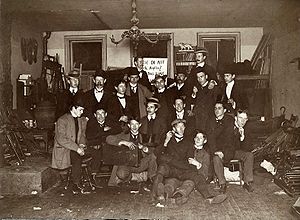 Armory show included a healthy number of forward-looking Americans, foremost among them the artists who would come to be known as The Ashcan School. A first American volley against the strict traditions of the National Academy was the 1908 show in New York by The Eight, a group of 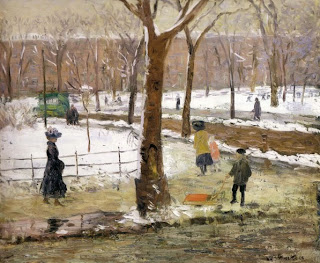 painters circled around the charismatic teacher/painter Robert Henri. It was their only group showing - the circle then expanded, with one result being the group that came to be known as The Ashcan School. As you might guess by the name, these painters, including Henri, George Bellows, John 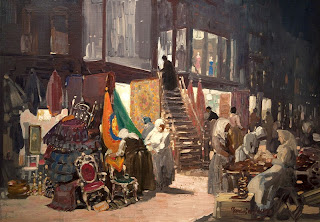 Sloan, George Luks and Everett Shinn, concerned themselves not with idealized beauty, but with a realistic perspective on the gritty life of New York's poorer neighborhoods and rich colorful streets. Many of them had backgrounds as newspaper illustrators so there is an element of reportage in the work of the Ashcan School, 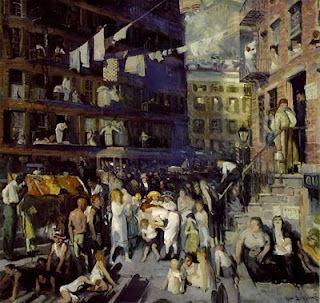 along with an acceptance, even celebration of human nature in its most banal and ordinary forms. There's more than a bit of Bruegel in the Ashcan School, coupled with the lush expressive brushwork of Frans Hals and Velasquez - no accident. These painters were sophisticated and knowledgeable and most had spent time traveling and studying in Europe. Notable works include Bellow's mighty Stag at Sharkey's (1909) his marvelously detailed Cliff Dwellers (1913), George Luks's Nighttime Buying and Selling on Allen Street (1905), George Bellow's 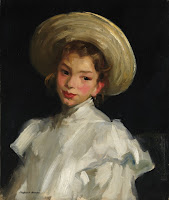 Washington Square South (1910) and John Sloan's McSorley's Bar (1912.) Robert Henri, for being such an inspiration, is better known for portraits - he's a marvelous painter whose brushwork and handling of paint is simply delicious. He did quite a few portraits of children, especially on his travels. This lovely example is from a stay in Holland in 1907.

The National Gallery in Washington has just opened a show of the work of George Bellows - I hear it's wonderful and can't wait to see it! http://www.nga.gov/exhibitions/bellowsinfo.shtm
The newly re-opened Barnes Collection in Philadelphia includes many works of William Glackens and examples from some of the other Ashcan painters.
http://www.barnesfoundation.org/collections/art-collection/collection-search
Posted by Marilyn at 11:25 AM