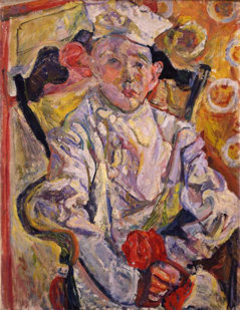 I'm now teaching a class I'm calling 'Midnights in Paris' (thanks to Woody Allen for the idea) which looks at the 'fantasy' eras of French art and history. The first in the series, the early 20th century, includes an artist we'll be seeing more of once the Barnes Collection reopens later this month. 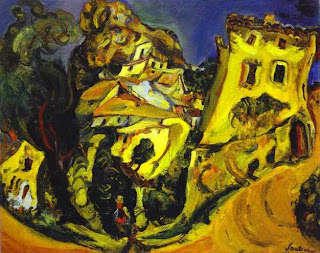 Chaim Soutine is the artist, and his story with Dr. Barnes makes a good headline: Starving Russian Artist Saved from Misery and Oblivion by famed American Millionaire Art Collector. The full story, of course, has a bit more to it. Soutine, born in a small Russian village in 1893, was beaten up at age 13 for breaking strict Jewish rules by drawing his rabbi - after weeks in the hospital he took the 25 rubles awarded as damages and got out of town - first to art classes in Minsk, and then to the art mecca of the time - Paris. For 10 years he lived hand to mouth in a series of creaky artist studios in Montparnasse, where he became close friends with other artists, especially Modigliani. His first art dealer, Leopold Zborowski, supported him after a fashion without much real success in selling his work - until the fateful day in 1922, when Dr. Barnes walked into the gallery run by Paul 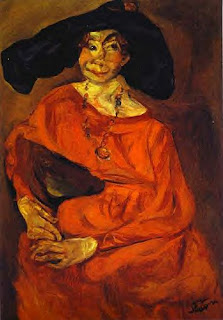 Guillaume (a garage mechanic who rose to be a celebrated art dealer and collector) and noticed a small painting of an unlikely subject - a pastry cook. An introduction to Zborowski, a trip to Soutine's studio, and 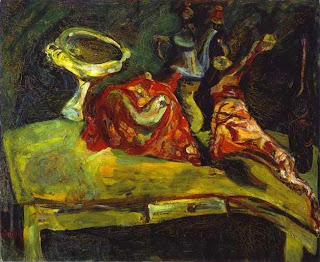 Barnes snaps up the whole lot of Soutine's work - some say 60 paintings, some say 100 - for a total of $3000. As far as Soutine was concerned, this was the treasury of Midas - as soon as Barnes left the premises, Soutine closed the door, hailed a cab and had the driver take him to Nice on the French Riviera, 200 miles away. It was a true turning point - the infusion of cash and belief in his work may even have saved a starving artist's life. Soutine returned to Paris and built on his success; his work began selling, he acquired a new apartment and studio, nice clothes (it is said that he became a 'dandy' in elegant shirts and silk ties) and wealthy patrons. Rollercoaster years followed, with health problems and an ornery disposition causing problems - and then came the Nazi occupation of Paris. Soutine, a Jew, fled Paris and when he tried to return was refused. He made it back at the very end of his life, assisted by Marie-Berthe Aurenche, the ex-wife of Max Ernst, and died in a Paris hospital. 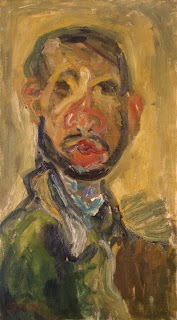 His 1943 funeral at the Montparnasse cemetery - 'on a sunny day' according to Marie-Berthe - was small and quiet, but Picasso was there to pay his last respects. The US, thanks to Dr. Barnes, is the place to see the best of Soutine's work. Though sometimes classed as an Expressionist, his quirky, 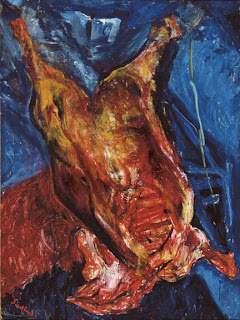 animated swirly style is unique. The charming and the grotesque balance precariously in his saturated compositions, whether the subject is landscape or still life, raw carcass (a favorite) or portraits of friends and patrons. Barnes's recognition of the unknown Soutine is, for me, one of the signatures of his own extraordinary story: the confidence and exceptional eye signaled by the purchase make this landmark collection significant for more than the fantastic array of works alone. It marks a symbiosis between art and collector that is rare at any age.
In 2006 one of Soutine's carcass paintings 'La Boeuf Ecorche' sold for $13.8 Million.
Paintings shown are representative of Soutine's work, not necessarily those in the Barnes Collection.
http://www.barnesfoundation.org/collections/art-collection/artist/51/chaim-soutine
Posted by Marilyn at 11:36 AM