Make way for Rembrandt, another masterpiece is in town

Rembrandt is no stranger to New York, but another masterpiece is always welcome. One of his greatest self-portraits just moved into the Metropolitan Museum for a visit - only a few weeks, but we'll take any time the great master can spare for his adoring fans, including me. This sublime late work comes from Kenwood House, London, a grand 'stately home' once owned by a scion of the Guiness family, with a bounty of graceful rooms remodeled by Robert 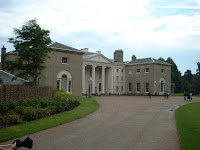 Adam in the early 18th century, a fabulous art collection and, apparently, a leaky roof or other pressing needs that require it to be closed for some time. I was in London for Christmas about a year ago and by chance stayed near Hampstead Heath, the vast, mythic park where Kenwood House is located. I hadn't even heard of it before I got there, but you can be sure I pulled on my boots, wrapped up in a warm 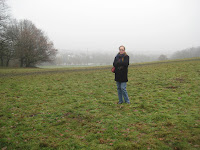 scarf, and tromped across the windy expanse to get there as soon as I did. I treasure the memories of that day, a chilly but glorious catalog - ducks on a frozen pond, bare regal 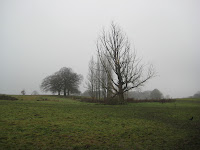 trees against a lowering grey sky, brave straggling groups with big dogs, footing made treacherous by both mud and ice, confused signposting finally resolved by a stranger's phone gps, then a stile and a small marker: Kenwood House this way. And at the end, like Oz at the end of the yellow road, this amazing repository of art, a collection that would more than hold it's own in any museum in the world. (Of course, after that trek, 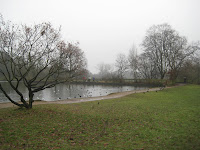 being maintained and repaired, and how nice of the English Heritage society that now owns the house to share the Rembrandt and other works while they go about their business. (The Rembrandt will join the rest of the collection for an traveling exhibition after the New York stay.) Rembrandt's 90 self-portraits, more than any other artist, are an incomparable treasure and record of his art and life,

but this one is one of the greatest. Dating from 1661, after wrenching ups and downs in his personal and financial life and only 8 years before his death at 63, it's a near companion of the 1658 self-portrait at the Frick, a few blocks away on Fifth Avenue.  Done in Rembrandt's bold brushy late style, both are richly, deeply
profound - at once examinations of a single man, the artist by practice and idea, and all of human nature. The Kenwood Rembrandt, titled 'Self-Portrait with Two Circles,'is one of several self-portraits that show him as an artist - it is him, rather than him dressed in costume or affecting a pose or expression. (In the Frick painting he is a regal character in a voluminous robe holding a scepter-like cane - the Frick description rightly includes the word 'majesterial.') Old, worn, dressed in cap and cape to keep warm while he works, he confronts us with a clear-eyed look of assurance, perhaps even defiance, and holds his tools, sketched so loosely that they are as much an idea as a fact, so we can't miss them. The circles on the wall behind him are the subject of some speculation; one opinion is that they are the first strokes of a globe, a motif linked to Dutch world trade that often appeared in paintings of the time. I prefer the other idea: these are the circles of Apelles, court painter to Alexander the Great, who set the bar for artists ever afterward by drawing a perfect circle with one unbroken stroke. The challenge is recalled throughout art history as the ultimate challenge of skill, control, and confidence. At this point in Rembrandt's life his only competition was himself; the world had done its best to beat him and subdue him, but here he is, still at work, and painting rings around any other living artist - and most who came after.
Posted by Marilyn at 12:16 PM