Chess - A Game of History and Charm: The Lewis Chessmen 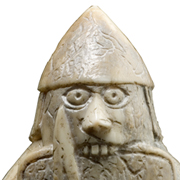 My favorite little men are coming to New York - The Game of Kings: Medieval Ivory Chessmen from the Isle of Lewis opens at the Cloisters on November 15. Bug-eyed Kings dismayed at the prospect of close and bloody combat, Queens holding worried faces, Soldiers so eager to begin that they bite their shields in anticipation, Bishops gripping their croziers, Horsemen hunched and ready: these little 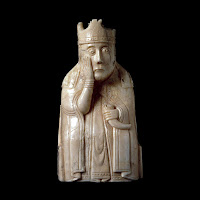 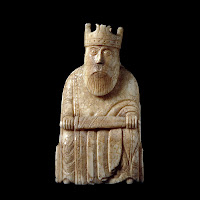 ivory creatures give us a world that faded long ago, though their iconic battle persists and endures in the game of chess. It is a fact that these delicate but vigorously carved ivory creatures were found in 1831 on the Scottish Isle of Lewis. It's agreed that they date from around the 11th century (partly attested by the style of the Bishop's miter) but beyond that almost all is speculation. Are they Icelandic, or Norwegian, for whom were they created, by whom were they used? The pieces have so much personality; it's frustrating that they can't tell more of their story. The game of chess predates these 'men', which are likely pieces from four sets - some are now in the National Museum of Scotland and some in the

British Museum (which lent theirs for the show.) Chess began sometime around 600 in northern India or

Afghanistan - the vocabulary of chess and the basic forms and rules come directly from those origins. These Indian illustrations show chess games between Krishna and his consort Radha and another played outdoors by high born gentlemen. Chess became very popular in aristocratic Europe during the 11th century - the quality of the Lewis Chess Set 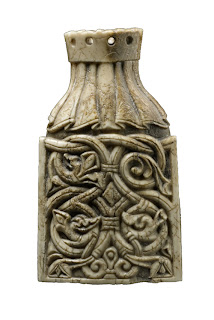 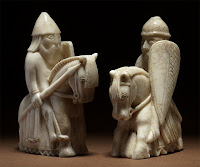 whoever they were, as being of wealthy and privileged rank. Even the backs are carved, in the intricate woven patterns consistent with the time and place. Norse mythology is written in these pieces, particularly in the 'Berserkers' those avid soldiers - Berserkers in the sagas were soldiers so frenzied by battle that they fought in a trance. The pieces are small, but larger than the ordinary chess 'men' of today's game - it is said that the board needed for a full game would have measured about 3 feet across - and that the board may have been red and white rather than black and white. Either color opposition makes symbolic sense: archetypal opposition can be seen as dark vs light, or as blood/passion red vs purity/innocence. A drafty battle tent, a lofty hall in a great stone castle, a blustery cold wind flapping and wuthering, the light from a fire flickering over battle-worn hands, faces creased as they ponder their moves and shift these woeful, charming little creatures - the Lewis Chessmen tell us silently that they were there, somewhere.
The following links give information about the exhibit and the Lewis Chessmen. 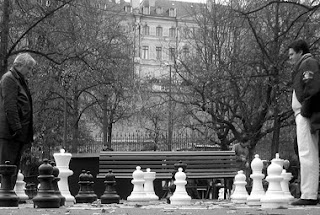 In a park in Geneva, Switzerland life-sized men are 'men' in a giant game of chess. Do you play chess? Is it just a game for you or an iconic battle of good and evil?