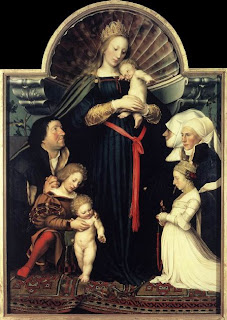 Big news today - Very Expensive Art! In this case, the Art is the Darmstadt Madonna by Hans Holbein, and the sales figure was somewhere around 70 million dollars. That may sound like a lot of money but for this breathtaking masterpiece it is rock bottom. I was amazed to read of the sale - it is incredible to think that a work of this importance could still be in private hands - and that it will remain the property of an individual. The sale moves it from 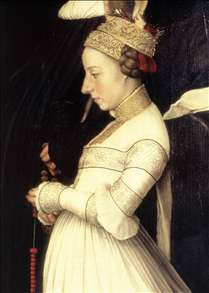 the private hands of a prince with a big inheritance tax bill to pay to the hands of a German industrialist, who, it is reported, will allow it be seen by the public. (The price would have been much higher if it had been allowed to leave Germany but it is a national treasure and must remain in the country.) Hans Holbein is best known for his portraits of Henry VIII and his English court. Looking for work as a result of the religious turmoil dividing Europe in the wake of the Reformation, he got to King Henry via the Humanist circles of Thomas More on the recommendation of the philosopher Erasmus, and the rest is literally history. Lucky Henry to have Holbein as his official court painter as he demolished England's Catholic traditions and built the Anglican Church - and lucky us, to have so many beautiful Holbein portraits of contemporary English court and society! The Darmstadt Madonna was painted in 1526, the same year Holbein left for England. It is a Catholic 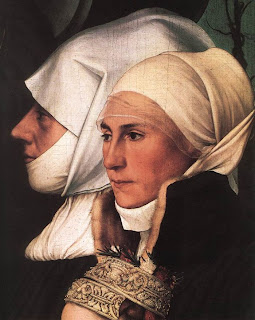 painting, a remnant of a German mindset that was eroding under the pressures of the Reformation; the 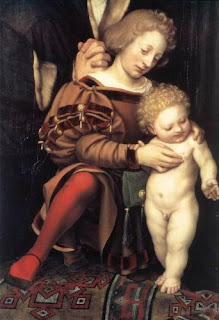 wealthy banker/soldier Jakob Meyer von Hasen, kneeling at the side of the Madonna and Child, is a staunch opponent of the new belief and likely needed the divine protection they represent. Two boys, a child and an infant play as if unconcerned but it is thought that at least one of them had already died. On the other side are two of von Hasen's wives, one deceased, and his living daughter, who bows meekly as she fingers her long coral rosary. Holbein's landmark style is a vivid amalgam of new and old, North and South - the incredible detail and clarity of Northern Europe, and the deep space and robust forms that show the influence of the Italian Renaissance. Holbein would be a supreme artist at any moment in time, but this masterpiece is the perfect testament to a singular man's extraordinary skill as well as a clear, articulate document marking where humanity was at a particularly significant place and time.
I have also posted this on http://www.artsmarttalk.com/blogartsmarttalk.html where you can see the pictures (and more of them) in a slide show with captions, and where the ArtSmartTalk blog is hosted on my own website. I'd love to know what you think! I'd be grateful if you would read the blog on http://www.artsmarttalk.com/blogartsmarttalk.html and take the poll to let me know which format you like better.
Posted by Marilyn at 4:20 PM

Holbein, a great love of mine.....what an exquisite masterpiece. Fran