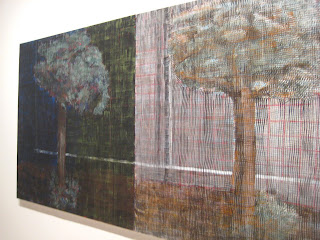 Talent is great, but LUCK is often the elephant in the room in art careers. One of my favorite artists from the 80's - or at least one particular show that made an artist a favorite - was Jennifer Bartlett with her exhaustive series of scenes of a banal

garden in the south of France, where she stayed for a period of months in the late 1970's. Jennifer Bartlett's biography includes a college friendship with Elizabeth Murray, and a list of instructors with names like James Rosenquist, Jim Dine, Robert Rauschenberg, and Claes Oldenberg. 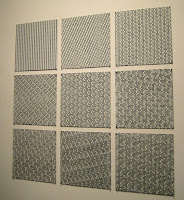 Luck is a great help in getting started, but you still have to do something with it. When I saw that exhibit of Bartlett's In the Garden series at Paula Cooper I was immediately drawn to the rich color, the heady sense of green life around a small pool, and the nearly inexhaustible creative possibilities of a single subject - an idea that has 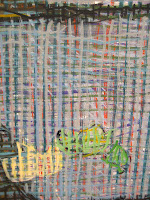 always been important to me in my work and my studio teaching (the artist makes a subject great through imagination and creativity; it is not the subject that makes great art.) (the 'water' painting shown at the top is not from that series, but So when I walked into the Locks Gallery in Philadelphia last week to see the current Jennifer Bartlett show, I hoped for that same rush of kindred feeling and excitement. It was there - a little. But not on the first floor - the introduction to the show and the artist (for anyone not 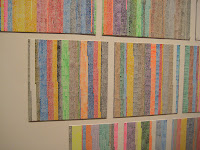 familiar with her) is an extensive collection of minimalist works from the early 70's - 'circuit board' painting, in keeping with a Modern Art moment, but boring as can be. Up close - very close, there was a bit of satisfaction in the variation in the tiny dots between ruled lines, especially in the few with color. Upstairs the 'old' Jennifer Bartlett of my admiration was more in evidence, with large lush paintings of foliage and flowers where close inspection yielded an appreciation of the links to her fascination with grids and order, but here there were loose, painterly brushstrokes in rich beautiful colors. And then, again, the minimalist returned - this time the dots and stripes in fluorescent colors. My sense was of a phase for catching her artistic breath until she finds that lush painting impulse again. I look forward to it.
Posted by Marilyn at 12:21 PM