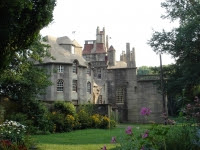 If you were an archaeologist with a medieval turn of mind and a Victorian sense of interior design, what would you do if an aunt died and left you a fortune? If you were Henry Chapman Mercer, you'd also be an ardent Arts & Crafts proponent and you'd build Fonthill, an outrageous fantasy castle in lovely Bucks County, Pennsylvania (a short drive NW of Philadelphia.) In 1898, before Mercer built Fonthill (in 1908, entirely of hand-mixed concrete) he created the Moravian Pottery & Tile Works to produce art tiles with designs inspired by his 10 years of travel in Europe, where he clearly made a

close study of all the historical sites. He returned and became a member of the UPenn Archeology department (despite having no degree in the subject) but it was when his wealthy aunt died that he really let loose with the Arts & Crafts. The Arts & Crafts movement, a reaction to industrialization that 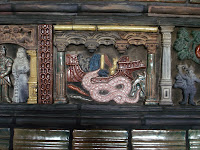 promoted such painstakingly patient arts as hand carved furniture, closely patterned textiles and wallpapers, and hand-printed books, was particularly strong in the late 1800's; major figures include William Morris in England and Elbert Hubbard in the US. Mercer was a bit late for that party but he seems not to have noticed. Every corner, every nook and cranny (Mercer should be a patron saint of nooks and crannies), truly every inch - walls, floors, and ceilings - is decorated in his quirky obsessive, handwork-attentive style. The ceilings are a particular 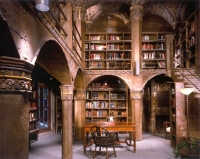 high point - the tour guide described the way in which laborers piled mounds of dirt on a platform across the tops of columns. When the shape was correct, they then covered the dirt with sand and pressed in tile decorations - thus working not only blindly but upside down and backwards - and poured the concrete ceiling. Only when it was set completely could they see if they had made any mistakes - there were very few from what I could see, but they couldn't have done much about them if there had been. The whole place is a wonder. One of 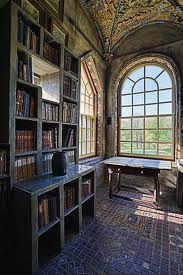 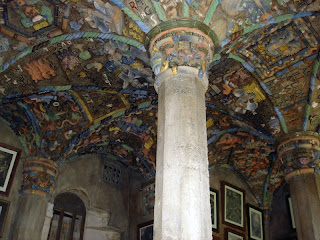 details of their content - trade in sheep, names of kings, etc. Also the Columbus Room, with a jigsaw puzzle ceiling with the map of the world and an illustrated history of the age of exploration (all made of tiles set into concrete, remember - upside down, backwards, working blindly.) There's no interior photography allowed so I'm using what I could find to give an idea. Pictures don't really do it justice in any case. There's no way to convey the moody, solitary genius spirit of the place with its twisting staircases, odd angles, slightly morbid atmosphere (Mercer died in a narrow bed in one of the nook/crannies) that is both claustrophobic and fascinating - you need to see it.

Note: the Moravian Pottery Works continues to operate, still churning out Henry's designs.There is also a nearby Mercer Museum. The website for all Mercer related sites is at http://www.mercermuseum.org/
Posted by Marilyn at 2:49 PM

The Mercer Museum is also worth a (separate) visit. It's a vast collection of pre-Industrial Revolution American tools, arranged by craft/trade. I seem to remember a room full of wood planes. It has a jumbled, atticy feel, but it's quite a resource, particularly if you're interested in traditional crafts.

we went there too, years ago, quite an amazing place!