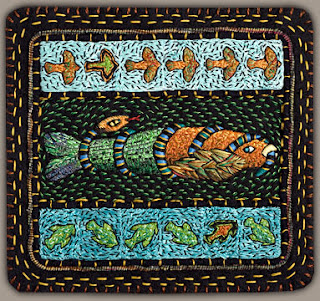 The PMA Craft Show comes and goes much too fast. This spectacular show, the first and one of the best of the major high-level Craft shows, took place in Philadelphia for four days over the past weekend. I was there for two, but two days was barely enough time to see it, let alone pay close attention to all the artists and their work. So I’ll share some of my favorites. 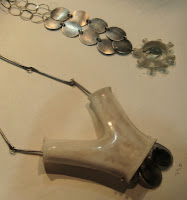 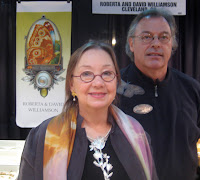 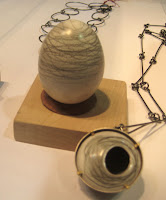 This was a great year for jewelry. Nature is a constant inspiration for artists, but this year’s crop seemed particularly focused on natural forms, shapes, and materials.  The very first booth I stopped at was that of Roberta and David Williamson, longtime veterans of the PMA show, who make the most wonderful combinations of metals  and crystal in which they often trap images like specimens. If you look closely at the photo you can see that David and Roberta, who met in art school and have worked together successfully ever since, are wearing examples of their creations. I was really intrigued by some of the smaller work in their cases, with antique prints and little bug drawings hanging from chains and worked into pins and rings. Christy Klug, from Austin, TX, gets one of my biggest gold stars. I really love her work, in no small part because she manages to use her jewelry as a drawing medium. In the photo you can see an egg with her calligraphic lines; next to it is an exquisite enamel pendant with a parallel form and surface – a presentation as thoughtful and striking as the work itself. One of the most unusual materials was the antler horn used by Eric Silva for brooches and pendants. He describes cutting and shaping the solid antler to give it flared edges and hollows, then polishing to bring out a beautiful patina. His pieces speak of the eternity in nature yet have fresh, contemporary style. 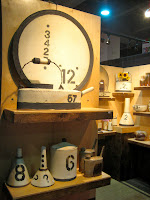 Of the ceramic artists in the show, I especially admired the work two of the newer exhibitors, Judit Varga from Maryland, and Nathan Falter from Missouri. Judit is one of those rare potters who appreciates the pinch pot, a relatively unsophisticated form for beginners (when I taught ceramics that was chapter one,) but in her hands a marvel of complex possibility.  Her small pod shapes grow into honeycombs of dark mystery, an effect furthered by a dark heavy clay with natural gravitas. Nathan Falter’s work, by contrast, quotes man-made forms – oil cans and funnels - tweaked by the earthy solidity of his darks and lights with a witty sprinkle of stenciled numbers and letters. 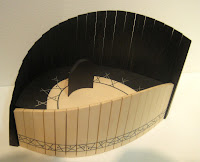 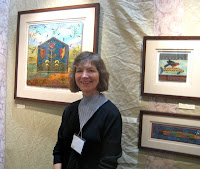 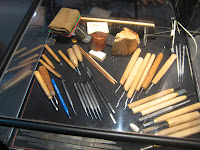 A good number of wood artists were represented, from furniture makers to turners. Janel Jacobson, from Minnesota, was kind enough to bring her tools, to let us see what she uses to make her magic – true magic – tiny, impossibly beautiful forms that recall the wit and careful artistry of Japanese netsuke.  I could hardly tear myself away from Philip Weber’s work. Philip, from Effort, PA, makes exquisite boxes of wood – boxes that are the jewels rather than what might go inside.  His oval box made of holly and ebony is a chess game of dark and light with inlays of tiny sticks of wood and metal, made so much patience and minute craftsmanship that the mind can hardly grasp what it took to bring it to reality. 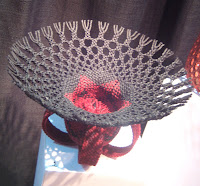 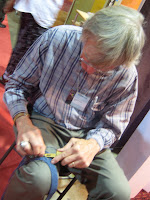 There were also plenty of fiber and textile artists, many of them showing wearable art - dresses, hats, scarves. David Fraser was one of the few hard at work in the midst of the show, working on his waxed linen weaving. His creations take many forms, including vases and tubular shapes, all of which have a vibrant, tactile energy. One of my brightest gold stars for the show goes to Renee Harris, a storyteller with color and thread. Rich, elaborate, elegant, whimsical, each of her wall pieces is a festival displaying a narrative that goes straight to the heart. I talked to Renee for quite a while – enjoying her conversation as much as her work – as she explained the process of masterful felting and embroidery, and spoke of her concerns for fish, birds, and the other marvels of nature that we humans treat so carelessly. It’s all there, in every stitch and surface, and the case is so beautifully made.

These artists all have websites – you can easily find them with a search. Some of them will be at the Smithsonian Craft Show in Washington in April. Go if you can, and if you do, tell them you know about them from ArtSmartTalk!
Posted by Marilyn at 3:19 PM