Rome - the Light and Dark of it 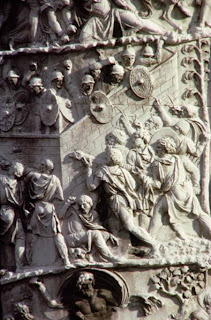 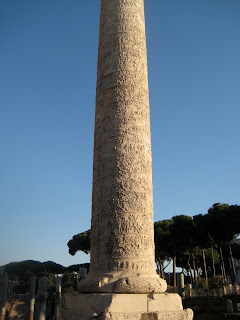 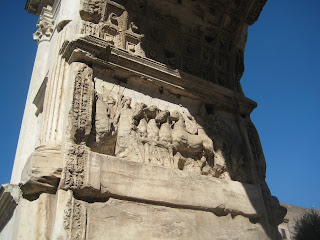 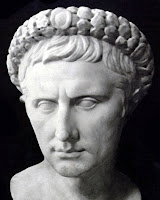 If you want to understand color, go to the South of France; that certainly worked for Van Gogh and Cezanne. But if it's light and dark you want to understand, head for Rome. Rome, where I spent the last week, is an intense study of the subject. Light and dark here are sensual, physical experiences with moral overtones. One minute the sun is beating down, filling body and soul with hot heavenly radiance that bounces off the orange/gold walls and pours into you until you are sated, saturated with light. Then you step into the shade and a curtain drops, plunging you into black so rich, so velvety, so complete that your balance evaporates. You wobble unsteadily for a moment, hoping you don't pitch forward onto the cobblestones, while your eyes do might battle with the forces of darkness, struggling to adjust.  Surely the bombardment of Catholicism in Rome is feeding my moral metaphors, but it is the give and take of light and dark in the extreme that explains why the Ancient Romans were masters of sculpture, especially bas-relief. Trajan's Column - amazing to see it just standing there minding it's own business after 2000 years while buses and taxis whiz by - is a great illustration. In the shade this masterpiece of 2nd century propaganda (designed by the great Apollodorus of Damascus) is a kind of visual mush, but in the bright sun the rugged, visceral details of Rome's victory over the Dacians spring to life. Similarly, in the Roman Forum The Arch of Titus, marking the victory in Jerusalem with the resulting destruction of Solomon's Temple, shows the triumphant parade and the display of spoils - here also the sun is equal partner to the sculptor, bringing every realistic detail into stunning relief. Busts of Emperors, richly carved sarcophagi, even architecture - in every important Roman art form the bright light of the sun is understood and assumed. The Romans didn't color their sculptures like the ancient Greeks - perhaps in part because they were more practical-minded, they counted on the ever-present, reliable sun to paint their work with the broad brush of dramatic eloquence.
Posted by Marilyn at 4:44 PM

Loved reading your reflections of the theatrics of Roman relief.

Thanks, Maria - I'm going to check out your blog! Watch for Paris thoughts next!