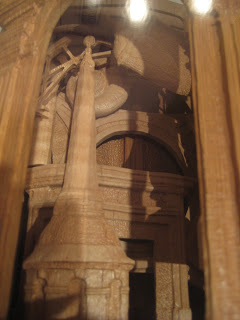 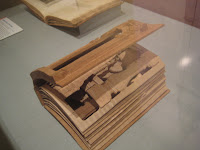 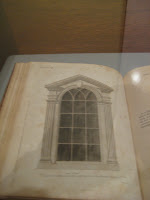 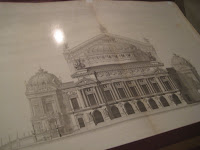 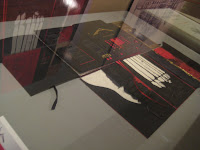 There is a lot going on right now in Philadelphia. The big NCECA (Ceramics) conference arrives March 31; it's going to blow the town apart from the looks of the program. More on that to come.  Another extraordinary event which started in January and will continue until April 11 is  PHILAGRAFIKA, 'an international festival celebrating print in contemporary art.' This is the first year of what is intended to be an annual event, and it's gotten off the ground with such smooth enthusiasm that I'm sure it will be a major event for years to come. 300 artists are participating at 80 venues all around the city, from tiny gallery spaces to events and exhibits at PMA, including a conversation with Kiki Smith on the subject (PMA - March 30) One of my favorites under the Philagrafika umbrella is a small exhibit at the Athenaeum, a wonderful place of books in an elegant historic space close to Independence Hall. The exhibit, in cooperation with the Philadelphia for the Book, is called "Building By the Book," and it features 6 book artists, each of whom used an historic book from the Atheneaum collection as a jumping off point. The collaboration between old and new methods,  technology, visions, and subject matter makes for compelling results, fascinating in both conception and construction. Pia Pizzo, a well-known book artist and former stage designer, using "Le Nouvel Opera de Charles Garnier" from 1876-81 as her inspiration, shows an multi-fold construction that marries the dramatic integrity of the sophisticated Paris Opera building with Baroque romance, particularly inspired by "The Phantom of the Opera." Her limited colors - matte black, white, vibrant red, and rich gold - meet with her virtuosic handling of paper, sometimes precisely cut and sometimes torn, to make a stunning, satisfying piece of theater in book form. Joseph Magnan's work, "Diorama," derives from the straightforward inspiration of Owen Biddle's "The Young Carpenter's Assistant," a trade textbook from 1805. The match is remarkable for the affinity between men at home with wood-working skills, one interested in merely practical ends that are aesthetic by nature (the stately architecture of historic Philadelphia) and the other, a contemporary sculptor who knows how to make magic out of the common substance. His carved book, with a cover of white oak and interior pages of maple, is a tour de force of space, art, and skill. One experiences it much like architecture, entering the book through a door and following into space that leads further into spaces beyond. The human imagination, coupled with consummate skills and standards of craftsmanship, can work wonders - this exhibition is proof.
Posted by Marilyn at 2:22 PM