A New Old Museum for Philadelphia

The idea of relocating the superb and under-known collection to Philadelphia, 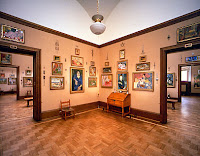 moving it from the beautiful BeauxArts building in residential Merion, PA, to the heart of the city near the Rodin Museum and the Philadelphia Museum of Art, has been a raging controversy for some time, stoked by all kinds of rational and irrational arguments. Doctor Albert Barnes hated the Philadelphia museum establishment, (far more conservative, surely, during the early 20th century than today) but failed to secure the future of his building and collection, so it was decided that the only solution was to move it (a gross oversimplification of a complicated story.) My feelings were mixed - in theory and from a distance I was opposed to moving it, but I revisited it recently and am now all in favor of the move. It's hard to find enough superlatives for the collection - it's one of the great treasures of this country 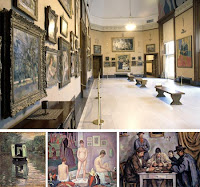 - and at present only a very small number of people have access. It isn't easy - first of all, you have to make an appointment (strictly limited by date) and you have to have a car. Barnes was an amazingly visionary collector; he trusted his own judgment and spent generously when he found an artist he liked - his favorites include Matisse, Renoir, Cezanne, and Soutine. There are lots of others, some not so great, and much art that isn't modern or western, but the reputation of the collection rests on the Impressionists and

Post-Impressionists. One of the arguments against moving it is the eccentricity of Barnes's vision for hanging his art; his strict formalist theories about pattern, shape, and color rule the galleries.

The arrangement of the art, which is sometimes just plain weird, is part of the art. If this aspect were to be disregarded it would nullify any arguments in favor, but the new building will reproduce the galleries in exact detail. This morning I went to the Public Arts Council of Philadelphia meeting to see the presentation of the design and was truly impressed. The architects, Tod Williams and Billie Tsien, have created a thoughtful, respectful, sensitive plan for the new museum, one that conveys both the spirit and the letter of the Barnes Collection, complete with 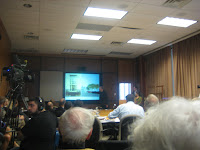 landscaping to reflect the integration of the original building with the important arboretum that is part of the Barnes legacy in Merion. I wish you could have been at the meeting - the comments afterward were the extremes of pro and con, with the opposition (many of whom are people from Merion who tried to stop the Barnes from sullying their community originally and now don't want it to move) especially 'extreme' in their vocal protests about the move itself (see today's NYTimes review or Robert Venturi's letter in the LA Times for more on this theme) but when the dust settled, the plan passed the committee unanimously. Philadelphia will be richer for this new addition which is scheduled to open in 2012. Start making plans now.
Posted by Marilyn at 7:39 PM

Thanks for reviewing this very important moment for art-in-Philadelphia. How ironic that the very folks who have so severely limited public access to The Barnes are now the one's trying to block it's move to a place where everyone will have access. The renderings look respectful and beautiful. Can't wait for the opening. This may prove to be the art-world event of the decade!