retrospective opened this weekend in Philadelphia and, as with the best retrospectives, it was an enveloping, nearly overwhelming experience. Gorky, who is important but whose name is never the first to be rattled off when talking about Modern Art, 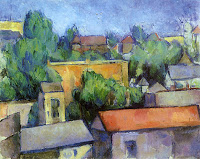 was an astonishingly proficient artist with an almost uncanny command of line, color, and composition. In the exhibit his career unfolds room by room, phase by phase, allowing you to learn in sequence about his work, his life, his practices, his disappointments, his triumphs, and finally his - I'm afraid so - tragic end. He arrived in the US after the genocide in his native Armenia (a tragic beginning too) and began soaking up wisdom and technique from observing art in museums. His first art god was Cezanne; the earliest examples of Gorky's work are super-copies of Cezanne, 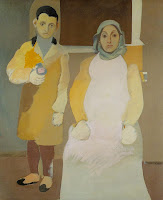 shockingly accurate in both spirit and letter. He later moved onto Picasso, 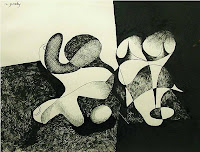 again showing such virtuosity that I think he could easily have made a lucrative career as a forger. At one point he did only drawings because he had no money for paint - the large format pencil works in the series "Nighttime, Enigma, Nostalgia" were one of the highlights of the show for me. His individuality emerged as he went on, in subject matter, especially works such as the iconic memory portraits of himself and his mother, and later in looser, more colorful abstract compositions 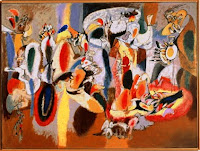 of great complexity. The 1940's was a high point - it was dizzying to stand in the room with his work from that time among so much color and energy. The painting "The Liver is the Cox's Comb" (1944) thought by some to be his masterpiece, is thankfully here, and it is a feast. Leave a comment - do you know Gorky? Have you see the show? What do you think?
Posted by Marilyn at 9:24 AM

Thanks! I don't know Gorky very well and so this was a terrific introduction. I will be sure to make-it to that show.

I have the hardest time figuring out Gorky's painting especially "The Liver is the Cox's Comb" (1944).
I am observing it is a representation of a sexually repressed person, but not sure what the bird is there for or what he was thinking while painting this.
Do enlighten me please.

Gorky was a lot of things, but I don't think he was ever sexually repressed. The Liver is the Cox's Comb is from a time of great happiness and a new marriage. This seems a celebration to me - of life in all its vigor, including the raging spirit of nature with bared teeth.