Last Saturday was one of those beautiful early fall days, so I 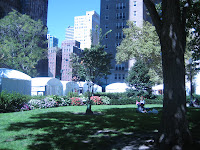 continued my exploration of Philadelphia with a long walk over to U Penn, across the Schuylkill River. On the way I happened upon the Rittenhouse Art Event, a big annual affair. Rittenhouse Square is a lovely green space, one of five in William Penn's original city plan, and the neighborhood is now known for fancy shops, restaurants, and apartments. The scene was ideal; white tents, green grass, shady trees, sunny weather, and 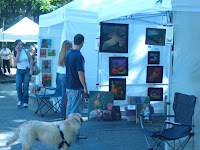 best of all for the artists, lots of people. I was impressed by the high quality of the art, but couldn't help reflecting as well on the fact that I saw almost nothing I didn't already know, not in the sense of a name but a general idea. There were a few exceptions - one being the work of Joyce Stratton from North Carolina who does small scale paintings with a linear, 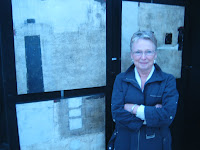 calligraphic feel that makes them more personal and contemporary than the usual art fair offering. If you've been to this type of art fair you probably know what I mean - lots of bold dramatic colors, often excellent skills in drawing and composition - but rarely does something add up to more than the sum of its parts. It's an extraordinary but timeless truth that despite a great deal of talent and hard work, art is too often simply high craft. The difference is hard to pin down, but has something to do with a sense of significance, something beyond the ordinary and merely good. After Rittenhouse Square I continued on to the Contemporary Art Museum at the University of Pennsylvania, and found myself thinking that, almost without exception, if the artists behind 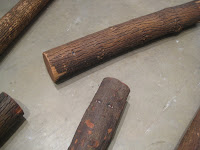 what I saw there tried to sell their work at an art fair, they would be the ignored ones, the ones whose offerings made people puzzled and uncomfortable. The most interesting exhibit was a collaboration between Tim Rollins and K.O.S, a group of disenfranchised students - the work was not so highly crafted as what I saw in the Rittenhouse show, but it was powerful in the scope of the ideas behind it, a key element of that quality of significance. This example - look closely - is a reference to the text of Pinocchio, one of several classic texts that inspired the art. What do YOU think? Leave a comment telling me your thoughts on your art fair experiences.
Posted by Marilyn at 8:33 PM

Very informative article! You articulate something that I've thought but couldn't put into words. The idea that high craft is only the sum of it's parts whereas art takes on a life of it's own, and speaks to the viewer.

Great post. The differentiation between high craft and true art is profound. Keep at it! All the rest of us are so much richer for reading your posts.