A cynical someone I once knew opined that Picasso should have died right after he painted Guernica, that everything that followed was ... you get the idea. This person was an artist, less successful than he thought he should be, and he could be hard on other artists. His judgment on Cezanne, however, matched that of more generous-minded souls 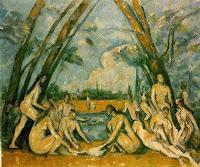 - Cezanne should have lived forever. He had some awkward years, but when he died in 1909 at age 70, he'd found his mother lode and was just getting up a full head of steam. There are certain figures in art, including Renaissance artists Giotto, Masaccio, and Donatello, who are equally important for how they affect those who follow as for their own supremely important work. Cezanne is one of these, a Renaissance artist for the modern age. I was recently in Philadelphia where I saw the exhibition 'Cezanne and his Followers,' a superb show chock-a-block with Cezanne masterworks, some of which I'd never seen in person, and intriguingly, modern names from Matisse and Picasso to Jasper Johns and Jeff Wall (Note to curator: not enough women!)

Picasso's at times slavish attention to the lessons of Cezanne is well documented, but this show considers connections that seem to be new, as between Cezanne's great 'Bathers' and a Brice Marden 'Red Rocks' painting. The explanation was that Marden took off from the lines in the "Bathers" - I love Marden's work, but that one was a little hard to swallow. Easier were the connections between Jasper Johns and Cezanne - side by side it wasn't hard to relate techniques and ideas. 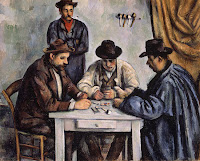 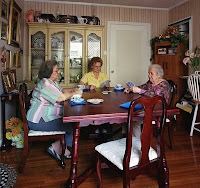 Most fun of all were the matches of Cezanne and Jeff Wall - whatever Cezanne was thinking when he painted his "Card Players" it probably wasn't that his gloomy quartet of hunched peasants would spawn Wall's ingeniusly kitschy trio.
Posted by Marilyn at 12:12 PM

I don't know if you are aware of this, but someone has been copying your blog posts. This post (and probably others by you) can be seen at this website:

They have been copying posts from my art history blog as well. I found out by doing a search at www.copyscape.com. Actually, this same person has uploaded my material onto a lot of similar blogs, and it might be the same for you.

I'm glad I found your blog through this mess, though. Your posts look like a lot of fun.

What a pleasant recollection of my final project on Cezanne in your wonderful art history class during my senior year in high school. Lord, that was 12 years ago!